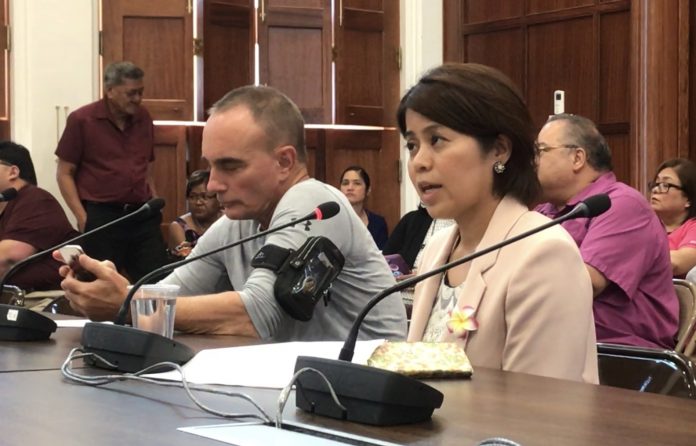 Dr. Shimabukuro’s testimony appeared to take GMH CEO PeterJohn Camacho and CFO Benita Manglona by surprise that by the end of the public hearing, although being physically present at the Guam Congress Building, neither sat at the table to testify and face what would surely have been rigid interrogation by lawmakers following Shimabukuro’s bombshell report.

In addition to Shimabukuro’s testimony, former GMH physician Dr. Jerone Landstrom also testified in favor of bill 262 to repeal a sales tax, noting that the hospital administration must first fix systemic and institutionalized practices that have run the hospital into mounting debt.

Shimabukuro’s testimony may have come as a surprise to many but as oversight health chairman Sen. Dennis Rodriguez pointed out at the end of both physicians’ testimonies, the presentation that they made today only corroborates some of the other allegations he’s heard that compelled him to introduce a resolution calling for an investigation into GMH executives.

On the controversial and shocking Joint Commission report, Dr. Shimabukuro confirmed what many lawmakers had suspected all along–that the reasons for threatening to revoke accreditation had more to do with hospital mismanagement than it did with the narrative that Adelup used to justify the scathing report, that it was a “funding issue.”

The ousted doctor said GMH administrators put together several press conferences to address the issue head on and ordered some staff to show up. They were given “talking points” to “make sure we say that TJC accreditation loss was due to the funding.”

“The majority of the citations were clearly due to leadership issues and we were not going to be able to hide it,” said Shimabukuro, adding that she tried to convince Camacho and Medical Director Dr. Vince Duenas to reconsider their approach. “The TJC failure was a leadership failure and … we must take ownership of it … The admin team was very upset with me and didn’t want to talk to me.”

Another staged effort administrators made, according to Shimabukuro, was the threat of a payless payday. On March 9, news broke that the hospital was so broke that it may not be able to meet payroll that day.

Throughout the day, GMH employees waited with bated breath to find out whether they would get paid. It would have been the first time in history that the hospital would not meet payroll.

By the end of the business day, 13 minutes before 5 p.m., checks were released. Shimabukuro says this was all for dramatic effect to get lawmakers’ attention as “checks were already there to be delivered since the morning.”

“I immediately called the [Department of Administration] to assess the situation. The DOA told me that there were enough funds to pay for all GMH employees but it was the decision of the CFO and CEO not to do so,” recalled Shimabukuro, adding that individual employees expressed their frustration with her because they were being used as “pawns.”

The final straw for Shimabukuro was when GMH administrators allegedly retaliated against her. She says she faced retribution for being vocal about her opinions and for sometimes disagreeing with management’s decisions.

Although she led many administrative fronts at GMH while achieving success in reforming several departments, areas and projects at the hospital, on April 13, Dr. Shimabukuro was served with a notice “relieving me of all administration responsibilities.”

The reason for what was essentially a demotion was “to fill a critical shortage of pediatric hospitalists.”

“This is entirely fabricated as the call schedule demonstrates that entire month of April and through June is covered. In addition, the pediatric unit census in April shows the census was so low that the unit had several days without any admissions and was even closed on some days,” explained Shimabukuro.

She also pointed out having physicians do administrative work while still practicing as a physicians is an exception GMH allows often. Such is the case with Outpatient Services Director and Department of Corrections Medical Director Dr. Larry Lizama who’s also held several other posts as GMH for the last several years as either medical director or interim CEO. Throughout his time at GMH as an administrator, Lizama has also kept his private practice.

“And they didn’t want me to work a few hours and go back to administrative duties as all the other medical directors were doing,” Shimabukuro pointed out. “Just to explain, Dr. Duenas and Dr. Lizama comes in few minutes or few random hours of the day and they go back to their private clinics.”

The most egregious and “atrocious” act, according to Shimabukuro was when GMH management lied under oath during a public hearing on May 2. During that hearing, Sen. Michael San Nicolas inquired about Dr. Shimabukuro’s position who was not present at the time to which Camacho replied that it was a “personnel matter.”

Later on in the hearing, Vice Speaker Therese Terlaje asked who held the position of assistant administrator of medical services.

“Dr. Duenas said, ‘Dr. Kozue’ as if I still held that position,” recalled Shimabukuro, explaining that just a few hours before that public hearing, Duenas had just effectively fired her. Although she was not terminated and continues to be paid a salary today, she was stripped of her duties and responsibilities.

“Dr. Duenas and I had a follow-up meeting [that morning]. In the follow-up meeting, I pointed out that their reasoning for ‘critical needs pediatrics’ were fabricated. Dr. Duenas continued to say that I was removed from all administrative duties no matter what and that I had to move past it. I was no longer the assistant administrator of medical services. I was no longer allowed to lead any projects even though my managers had been asking for my return,” explained Shimabukuro.

“Why didn’t he say honestly to the public when asked by Sen. Terlaje that the position of assistant administrator of medical services is vacant, as he had just removed me from the position a few hours ago? Because they absolutely wanted to hide the truth. They hide the truth from everyone,” she added.

After the public hearing ended, GMH sent out a media statement, implying that Dr. Shimabukuro was nothing more than a disgruntled employee with an axe to grind.

“Dr. Kozue Shimabukuro’s testimony tonight is materially false and a misrepresentation of the facts. GMH will address the issues raised in the appropriate venue. While we understand that Dr. Shimabukuro is disappointed that her duties were recently removed and she may be upset, her testimony tonight was socially irresponsible and a disservice to her colleagues and the hardworking employees at GMH,” said Camacho.