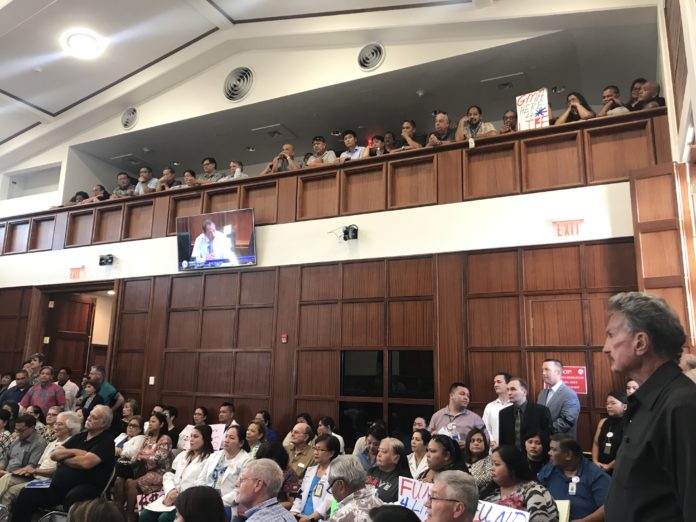 Guam – The public hearing of the legislature was so crowded during today’s (Mon.) hearing on bill 230 that Speaker B.J. Cruz had to actually ask people to leave.

“Please there is no need for you to be uncomfortable standing up you can be more comfortable in your offices watching and coming as you wish later on. I mean this is like a bela. You don’t all need to stand in line and be the first ones. You can come later and do your testimony,” said Speaker Cruz.

The measure, introduced by Governor Eddie Calvo in collaboration with Speaker Cruz, repeals tax breaks for the wholesale, banking and insurance industry in order to increase the subsidy and fund capital improvements a the Guam Memorial Hospital.

About half the crowd was made up of GMH doctors and staff while the other half was made up of members of the business community affected by the measure.  It was so crowded the public spilled out into and filled the hallways of the legislature.

Once the crowd was under control the Speaker allowed doctors to testify first, because he was told they had to return to their patients.

“And we’re here today because we desire from our political leaders a dedicated source of funding where the annual GMH uncompensated care shortfall that has been identified roughly 30 to 40 billion dollars a year and secondly Mr. Speaker we are hoping that this bill 230 will help us further fund hospital modernization,” said GMH Medical Director Vince Duenas.  “And looking ahead Speaker, yes, there is a price tag. Healthcare is not free. But what price tag do you put on the health and lives of our people?  What price tag do you put on providing our hospital with the facility with a modern technology with supplies equipment and medications to heal and restore the sick—to decrease the suffering of the sick to save lives and to provide comfort when we are dying? What price?”

Several more doctors spoke in favor of the legislation because it provides a funding source for the hospital. But other members of the public like former senator Bob Klitzkie spoke in opposition to the measure saying GovGuam should instead make more effort to cut costs and then look at raising revenues on a temporary basis. He suggested a surcharge on the territorial income tax of 10 percent with a one fiscal year sunset provision on the surcharge. He also made other recommendations like leasing or selling GMH. Former Senator Simon Sanchez also submitted testimony in opposition to the measure but with other recommendations. Sanchez recommended temporarily raising the Business Privilege Tax or Gross Receipts Tax to 5 percent with a 3-year sunset provision.

GEDA Administrator Jay Rojas submitted testimony on behalf of GEDA in opposition to the bill because it contains a provision that prohibits GEDA from issuing or renewing any more qualifying certificates (QC). A QC is a certificate given to businesses granting them various tax breaks.