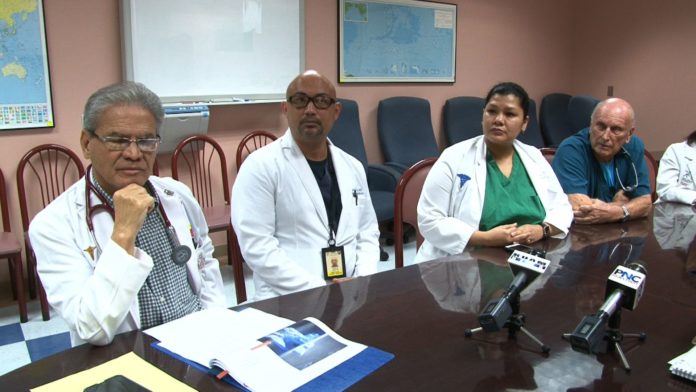 Guam – While the focus for the island’s only public hospital has been on the Joint Commission denial report and on a bill to remove tax exemptions for certain industries, the Guam Memorial Hospital put some of their most vocal doctors on the front lines today to shift the public’s attention back to the root cause of all their problems: lack of funding.

The message at today’s press conference with GMH doctors was loud and clear: Senators, the ball is in your court.

“Whatever bill comes out it needs to address the annual $30 million to $40 million underfunding to GMH. How that is going to morph, that’s the legislature’s responsibility,” said Medical Director Dr. Vince Duenas.

The underlying issue for GMH is a recurring one: too many indigent patients who cannot afford to pay, insufficient federal reimbursement, and inadequate government subsidies to sustain the operations.

It’s a perennial problem, like an open sore that just won’t heal. And for decades different administrations have tried, with only short-term success, to rescue the hospital from sinking. But the five physicians on today’s panel agree: we’ve now reached a critical point and the Joint Commission preliminary denial of accreditation only lends a peek at what kind of disaster lies ahead.

Dr. Jim Last, president of the medical staff, pointed out that in other stateside jurisdictions, public hospitals are adequately funded by their respective legislatures.

“Where did they get their funding? The legislature; they were responsible. And so any money that was needed, you go to the legislature and they would give it. Why doesn’t this legislature take over the funding of the hospital?” said Last.

At a public hearing on Bill 230 Monday, the medical and business communities showed up in droves, their testimonies on opposite sides of the spectrum.

The medical community pleaded for support of the bill which would repeal tax exemptions for the banking, insurance and wholesale industries while the business community spoke out against the measure because of the impacts it would have in their respective industries which could in turn drive up prices for consumers.

“In the hearings I heard, ‘If you raise taxes, if you continue to fund GMH, the quality of life of the people gonna [sic] go down.’ Did you hear that word? ‘Because prices gonna [sic] go up.’ One of them even said the choice of salad dressing is gonna–it used to be two but now we have 10. Remember that section? I was thinking to myself, quality of life, how good is it if you have too many salad dressings? If you’re dead you can’t enjoy that,” said GMH Associate Medical Director Dr. Kozue Shimabukuro.

In the decades GMH has been fighting for funding, it’s the administrators who have faced the legislature or the community at-large, becoming the faces for the ailing hospital. But with GMH now reaching a boiling point, it seems a different approach has been taken–one that involves more physicians and nurses who, after all, have a first-hand knowledge of the hospital’s daily operations. Their voices are more powerful when it comes to advocating for patients.

“I’ve been hearing a lot of negative reports about the hospital. I can assure you that since I’ve been here there’s been quite a change in the performance of the hospital staff and how patients are treated. It is much superior now,” said Dr. Last, who’s been with GMH since 1996. “The nurse starting at GMH makes $17 an hour. If she works in the US it’s gonna be $40 or $50 an hour. The marvel is we keep these ladies. That’s the marvel to me.”

PNC: “Why are you all still here?”

“Guam is our home. I love California, I trained in California but I love Guam more,” said Dr. Jeff Cruz, internal medicine physician.

“Physicians, professionals, pharmarcists, rehabilitation therapists, everybody is at least 25 percent to 30 percent paid less than regular professionals, but they choose to stay. the answer to that question is because this is my hospital,” added Dr. Shimabukuro.