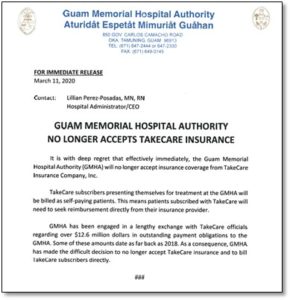 The Guam Memorial Hospital Authority this afternoon announced that it will no longer accept TakeCare Insurance due to TakeCare’s failure to pay what the public hospital says is the $12.6 million the insurer owes.

“GMHA has been engaged in a lengthy exchange with TakeCare,” states the news release. “Some of these amounts date back to 2018.”

As a result, GMHA says they “made the difficult decision to no longer accept TakeCare Insurance and to bill TakeCare subscribers directly.”

“TakeCare subscribers presenting themselves for treatment … will be billed as self-paying patients,” states the release.

That means patients who have TakeCare Insurance will need to seek reimbursement directly from their insurance provider.

TakeCare subscribers have never been covered at the private hospital, Guam Regional Medical City. Today’s announcement leaves them without coverage at the public hospital as well.

In response, TakeCare issued a statement saying that upon review of the $9.1 million in billings received from GMH “TakeCare determined the billings only amounted to $2.8 million” and “TakeCare continues to request billings and documentation for the balance of $6.3 million.”

TakeCare says they want to reconcile the accounting “but proper documentation and billings must be provided” by GMH.

The insurer says they have offered to credit GMH $6.3 million against the $12.6 million the hospital claims is now owed calling it “a reasonable and responsible solution for both parties.”

TakeCare they want to settle the matter with GMH and “move forward” to provide “affordable and accessible healthcare” to their members.

TakeCare concludes by advising its members to coordinate the billings from GMH with TakeCare “to ensure payment.”

READ the response from TakeCare in FULL below:

The balance is now said to be $12.6 million.  TakeCare wants to reconcile the accounting between TakeCare and GMH, but proper documentation and billings must be provided.  TakeCare is audited annually and has to meet federal accounting standards.

TakeCare has offered to GMH to credit $6.3 million against the $12.6 million and GMH to provide the proper documentation and billings to reconcile the remaining balance.  This is a reasonable and responsible solution for both parties.

TakeCare wants to settle this matter and move forward with its relationship with GMH to provide affordable and accessible healthcare to TakeCare’s members.

TakeCare members will need to coordinate with TakeCare the billings from GMH to ensure payment.