Guam – The Guam Memorial Hospital is in jeopardy of losing its accreditation following a notice by the Joint Commission of its decision to deny accreditation subject to an appeal.

GMH management called for a last-minute press conference today to make the disappointing announcement: after their most recent inspection by the Joint Commission on Jan. 5, they received the results of the survey and it doesn’t look good.

The threat of losing accreditation means GMH will not be recognized as a preferred institution that meets the standards of patient care.

While the loss of accreditation may hamper the hospital’s prospects as a preferred institution of patient care, GMH CFO Benita Manglona says it will not affect their Medicare status with the Centers for Medicare and Medicaid.

“On the Medicare side, for the billings side, that is basically payment for services, you can’t really equate it [to Joint Commission accreditation],” she said.

“We are hard pressed everywhere and we are in a constant crisis management because we don’t have funds,” said Duenas.

Dr. Duenas’ emphatic remarks come ahead of an oversight hearing scheduled at 5:30 tonight and also amid heated debate over a measure by the governor to remove the tax exemptions for the wholesale, banking and insurance industries in order to bail out the hospital.

“If we lose accreditation we will want it back and we will do that but the legislature, you gotta come and step up to the plate and help us,” implored Dr. Duenas.

The Guam Memorial Hospital has been bailed out several times over the years, and for the most part it’s been through bond proceeds.

In 2016 GMH received $45 million in bond proceeds to pay down its $30 million debt and improve its facilities. And now, about a year and half later, it appears the money’s run out as the hospital is once again behind in its vendor payables to the tune of $9.5 million.

“They spoke in broad strokes and they talked about things like ceiling tiles that were stained. In this particular follow up visit they found that there was a repeat finding that there were still ceiling tiles that were stained,” said Camacho.  “That has an impact in patient care, if it’s in a critical area, because of the possibility for infection.”

Funding issues, mounting debt, dilapidated facilities and management conduct concerns have plagued the hospital for decades. Under the Calvo Administration, GMH saw up to six different CEOs, including some in an acting capacity due to vacancies.

This is, however, the first time since 2009 when GMH received the recognition of an accredited hospital that the Joint Commission has given a notice of denial of accreditation pending appeal. 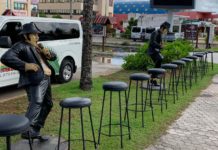