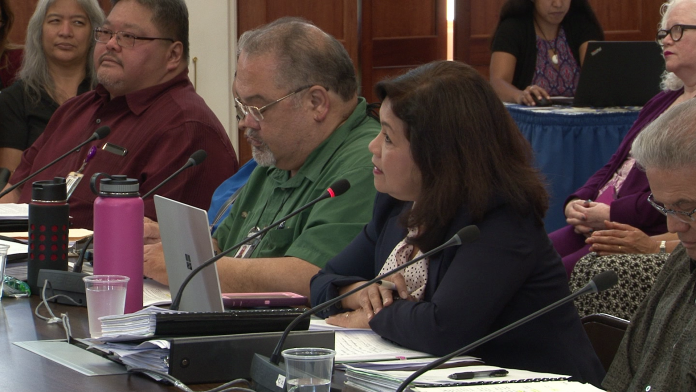 Guam – Another tension-filled public hearing for the Guam Memorial Hospital was held today, this time as the hospital faced lawmakers to present their fiscal year 2019 budget request.

Hospital administrators spent the first half hour of the budget hearing presenting their overall budget request of $243 million with a special report by a trained nurse on their need to upgrade their electronic health records system.

Their presentation did not include any commitment to fixing errors cited in a recently leaked report from the Centers or Medicare and Medicaid which is now threatening to pull their provider agreement that’s been a major source of funding for the hospital for years.

“One of your division heads came in and talked about the fact that the cafeteria needed a dishwasher and had a couple of things and that CMS was going to ding us for it because of the fact that paper plates and Styrofoam plates and containers aren’t supposed to be used,” Speaker BJ Cruz pointed out. “That took up four pages in the CMS report. This morning nothing.”

Just as he vehemently declared two nights ago, CEO PeterJohn Camacho continued to refuse to release the CMS report and now the corrective action plan they submitted to CMS. This, again, incensed lawmakers.

“Honestly, that doesn’t make any sense to me from my viewpoint that if you are trying to address citations in the CMS, I would think you would want the entire government of Guam resources at your disposal to really help you, to really, sincerely, address those things and I don’t see how you’re gonna do that without your board knowing what it is, without your entire hospital agreeing that is what we should do, can do. I especially don’t understand why it’s a secret from the legislature,” lamented Vice Speaker Therese Terlaje.

Instead, much of the focus of today’s budget hearing was on the EHR system which takes up about $20 million of GMH’s budget request.

The system was purchased in 2012 but it wasn’t until after the hospital spent millions on this purchase that they discovered it to be incompatible with their other software systems.

Sen. Michael San Nicolas was taken by surprise by this revelation by a nurse that years of delaying the upgrade could now put the entire hospital in jeopardy.

“This nurse probably gets paid one-fourth of what you guys do and this is the kind of heroic undertaking that will turn this hospital around. And you guys pull a nurse in and make her do that job,” said San Nicolas. “That’s the kind of management failure that CMS is talking about. That’s incredible!”

“May I respond?” interrupted GMH CFO Benita Manglona who was then cut off by San Nicolas’ rant.

“What’s incredible is that we wouldn’t even have found out about any of this stuff. I mean you wouldn’t provide us the CMS report. Everything that we’ve been hearing up until just these past few weeks have been about increasing a sales tax and wearing black arm bands to create a sense of urgency, parking a hearse out in front of the building and yet all the rot is inside,” San Nicolas continued.

“If GMH had been funded all this time we would have been able to procure that system and the right system in the first place,” argued Manglona.

“This is my first time seeing a presentation in all these years about the broken electronic health record system,” rebutted San Nicolas as he held up the paper presentation by the hospital.

“I have, senator. I have asked for money for IT but it has been ignored. I went to GMH. I came to GMH in 2015. There’s that request for the IT, was requested in 2016, that $179 million project that we were trying to do, $125 was for CIP and the rest was for the operation, the back–the vendor payables. We did ask. We’ve been asking so don’t I know … you sit up there, you’re all very powerful and you’re trying to shut me down,” countered an infuriated Manglona.

Hospital officials could not say whose decision it was to purchase their current EHR system.