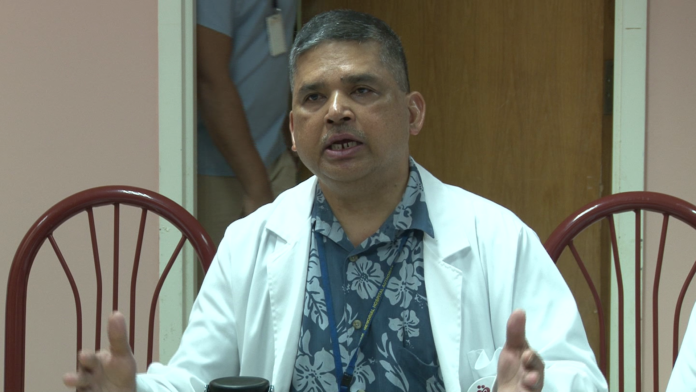 Guam – Guam Memorial Hospital doctors and managers are up in arms over a special investigation called for by Health Oversight Chair Sen. Dennis Rodriguez Jr.

It was held to respond to Senator Rodriguez’s resolution 345 which proposes to create a special investigating committee to look into GMH. Among the issues listed in the resolution is hiring practices dating back to January 2011 to the present. Dr. Lizama took issue with the resolution.

“I want the senator, who is requesting for an investigation of hires as I am publicly stating–what I have done in my hiring practices?” lamented Dr. Lizama. “And if it means that we do not provide these services then tell us because he’s the chair of the Healthcare Committee since he was elected and I’ve been in dialogue with the senator up to these last couple of years. He knows what happens here in this hospital.”

Dr. Lizama was the medical director for GMH up until recently when Dr. Duenas took over. As a director, Dr. Lizama was primarily responsible for the recruitment of physicians to GMH. Physician retention has been a challenge for GMH due, in part, to its inability to provide needed resources, especially for specialty care.

Interventional Radiologist Dr. Miran Ribati attested to this at today’s press event, noting that one of his specialties is in removing blood clots in stroke patients.

“I cannot perform the procedure because those catheters … and this equipment is very expensive and since money is a problem, we don’t have those available,” said Dr. Ribati.

While Dr. Lizama maintains there is no need for an investigation–the sole purpose of which would only serve to detract from the root issue of funding–he’s ready to be put under oath now.

But how does Dr. Lizama know his conduct is a subject of this investigation? Lizama says he sent Rodriguez a message on Saturday telling him that he’ll be gone for a month on personal leave.

“And his response was [that] the investigating panel has not ben assembled, so I can go on with my time off because it’s not gonna be soon that they’ll call. So he didn’t say that I’m not gonna be called. So you put that response with my concern and I think this is–I’m the only left over from that, from 2011,” noted Lizama.

Dr. Lizama continued to defend GMH staff from allegations or even insinuations of impropriety.

“Let’s have a discussion about it rather than attack us publicly that we’re doing something for some personal or, I don’t know what am I being accused of? I have a special interest? I only promise my patients and the patients that were here when I was a hospitalist,” said Lizama.

Dr. Duenas added: “I mean to characterize nurses and physicians at GMH as corrupt, incompetent, liars and addicts, that is farthest [sic] from the truth and it’s so despairing and discouraging to our people to hear that.”

You can read the senator’s resolution here.