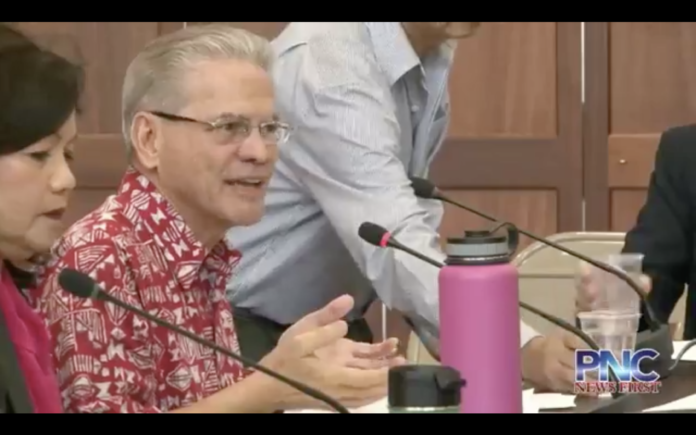 Guam – The Guam Memorial Hospital submitted their list of priorities to fix at the hospital as requested by the legislature, but at a work session today to discuss the report, senators were not quite satisfied with what was turned in.

The list was requested by the Committee on Health during a work session on Monday where lawmakers asked the GMH administrators to submit a list of their immediate needs for each department in the hospital as it relates to the Joint Commission inspection report that’s now the subject of a potential loss of accreditation for the hospital.

GMH managers submitted the $83 million-dollar list, but as senators reviewed the documents, they found that it was an inflated request.

“What I’m asking is you give us [is] the priority. The priority listing, right, of what is needed right now in order for you to, using the Joint Commission report as your guidance, is when [Centers for Medicare and Medicaid Services] does come, what are those violations that you have now that you need to correct?” noted Health Committee Chairman Sen. Dennis Rodriguez Jr.

The list, GMH officials emphasized, was not a Christmas wish list and was submitted by the individual departments to the hospital’s managers.

“I understand but you have the Joint Commission report now and there’s specifics there and the ones that are specific that are,–we’ve talked about was the breast milk … that type of, that’s the type of things we wanna know,” Rodriguez responded.

Medical Director Dr. Vince Duenas reiterated that it’s not that simple to break it down into what the senators are asking for. For example, one of their requests is for a device that makes it easier to find veins called Accuvein. Dr. Duenas pointed out that it’s difficult to categorize its level of need.

“Because some people are hard to stick. We can’t find IVs and rather than do a central line or an operation to an IV. If we had that we can find the vein, get the IV access and give antibiotics right away, give what’s necessary. If we can’t even start an IV in our patients, that could cause significant harm,” expressed Dr. Duenas. “We don’t wanna nickel and dime our leaders but this needs to be look at at that level.”

Still, lawmakers and hospital administrators wrestled over the details of the priority list. Senators pointed out that there are items in GMH’s request that are not glaring priorities. One area of concern listed for the facilities and maintenance department was the old MRI building that’s been sitting idly at the front of the GMH campus.

“You’re putting it on a priority list and these are the things, I guess, I don’t understand. It’s $150,000 to demolish that building and I can’t see how that’s harming any patient by sitting there,” argued Vice Speaker Therese Terlaje.

GMH CEO Peter John Camacho explained that by demolishing the building, it would free up some space to add more parking stalls to their overcrowded parking lot and thereby reduce potential delays in patient care.

“So we are able to open up a few more slots, it might cut down on some of the delays for staff to find somewhere to park so that they can get in to get on to their job shift,” explained Camacho.

To that, Sen. Rodriguez offered up an immediate solution.

“I suggest you remove all the administrative parking [stalls] in the front and reserve that for your nurses and doctors that need to get to these patients on time,” said Rodriguez.

GMH later agreed to submit a new list to the senators outlining the priorities as best they could by identifying the corrective action measures listed in the Joint Commission report.