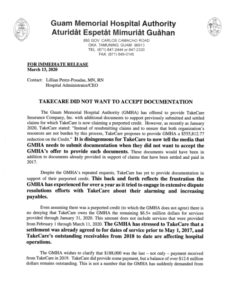 In a strongly worded news release, the Guam Memorial Hospital Authority has refuted TakeCare’s claim that billing documentation has not been provided to the health insurer.

“It is disingenuous for TakeCare to now tell the media that GMHA needs to submit documentation when they did not want to accept the GMHA’s offer to provide such documents,” states the GMHA release.

GMHA announced on March 11 that it would no longer accept TakeCare Insurance because the company has failed to pay more than $12-million dollars owed to the hospital.

The next day TakeCare held a news conference at which Health Plan Administrator Arven Lojo said GMHA has sent letters seeking payment but failing to provide a detailed breakdown of the cost of the medical services the patient received.

In its March 13 release GMHA quotes a letter sent in January by TakeCare to GMHA in which the health insurer stated “instead of resubmitting claims and to ensure that both organization’s resources are not burden(ed) by this process, TakeCare proposes to provide GMHA a $555,812.77 reduction on the credit.”

The GMHA release states that the $12.6 plus in claims owed by TakeCare were submitted “with all required supporting documentation for services dating back to 2018.”

As a result of TakeCare’s failure to pay those claims, the release states, “GMHA was forced to issue a demand letter when TakeCare unilaterally diverted monies it was supposed to pay the GMHA and applied those amounts to its purported credit.”

The release concludes by stating that GMHA “requested good faith payment and proposed a payment plan, but TakeCare has not yet responded.”