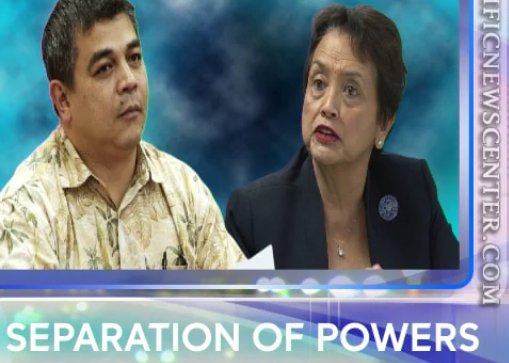 On Wednesday, PNC aired a story about Gov. Lou Leon Guerrero’s reaction to Bill 11, which aims to remove the governor’s authority to renew a public health emergency and place this instead with the Legislature.

Today, PNC spoke with one of the bill’s sponsors, Senator Tony Ada, to get his thoughts on the matter. Ada is also chairman of Guam’s Republican Party.

The governor recently spoke with Newstalk K57’s Patti Arroyo about the bill which she thinks is unnecessary.

Leon Guerrero said she believes the authority to renew public health emergencies gives the governor much-needed speed and agility to respond to crises.

She also said she hasn’t abused her authority and she’d prefer that any senators who disagree with her policies speak with her directly.

But Sen. Ada says the bill isn’t a critique of the governor’s performance and that it’s simply a means of maintaining accountability during a crisis.

“I heard her communications director Krystal San Agustin comment that hey, the Legislature could have come out and canceled it at any time or things like that, and I don’t think that’s the route we want to take, right? If there’s an emergency, we need to address the emergency. It’s just how can we get greater accountability and transparency on this emergency. And that’s all we’re saying,” Ada said.

He added: “Perhaps, if they want, we can turn around and look at the entire Chapter 19 and not just Section 3. Because Section 3, that’s what it does. It just says come back to the Legislature every so often after the 30 days to get the concurrence of the Legislature.”

Chapter 19 of the Guam Code is the part of the law that deals with emergency health powers.

Ada says that Bill 11 is simply an attempt to improve Chapter 19 based on lessons learned from the pandemic.

“We’ve never used Chapter 19 right? I mean, gosh, so this pandemic is novel, it’s new to us, it’s new to the world, so absolutely, but we need to ensure that we make adjustments when necessary and as needed. So that we can use it for future use. We can learn for future emergencies. Where did we go wrong? What did we do wrong? Or where were we strong at? What are the weaknesses of the law? And that’s what we need to examine, strengths and weaknesses,” Ada said.