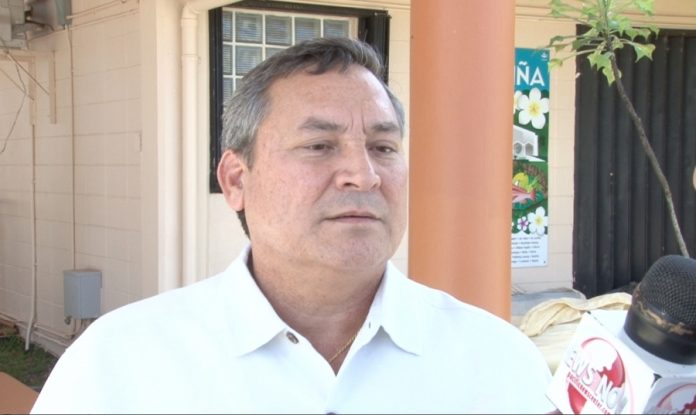 Guam – The aftermath following the passage of Bill 4 which seeks to repeal GovGuam pay raises has certainly riled Governor Eddie Baza Calvo. In a press conference today, the governor called the pay raise repeal nothing more than “partisan politics.”

Yesterday, lawmakers voted 10-5 in support of Bill 4, but the Governor says he already plans on vetoing the bill. He argued today that if Senator Frank Aguon Jr.’s bill manifests into law, the pay for some of the island’s officials pay will not be commensurate will their duties and responsibilities particularly for positions such as the Chief of Police, the Lt. Governor, and even his office.

“So, now if Senator Aguon accomplishes his goal and objective then youll see this inequity. I don’t know about you folks, but doesn’t it seem strange that the governor and everyone of his employees under him will be paid less than the Deputy Marshall of the Court or the Clerk of the Court? I’m tired of this partisan politics… all this emotional b.s that has occurred over the past years and really a lot of it has been by a lot of these people talking with emotions and not looking at how this thing started in the beginning,” he quipped.

In response, Senator Frank Aguon Jr. claims that the bill reflects the voice of the people adding that the governor has little to worry about if his aim is to protect his employees.

“Bill 32-208 is still in place and because that is stil inclusive of the cabinet members’ salary, Bill 4 would only address the governor, the lieutenant governor, and the senators. The way I legally understand it is that the cabinet members pay would still remain intact because the public law is the most current law in the books. I think we need to reflect on what has transpired in the last two years and that is our people insisting that we address the pay raises. I think it’s unfortunate that the governor is looking at vetoing the bill. I certainly hope we can sustain an override because this is what our people,” he said.

Meanwhile, Bill 5, the companion legislation to Bill 4, seeks to separate the office of the governor’s cabinet members. It’s currently under committee for review.