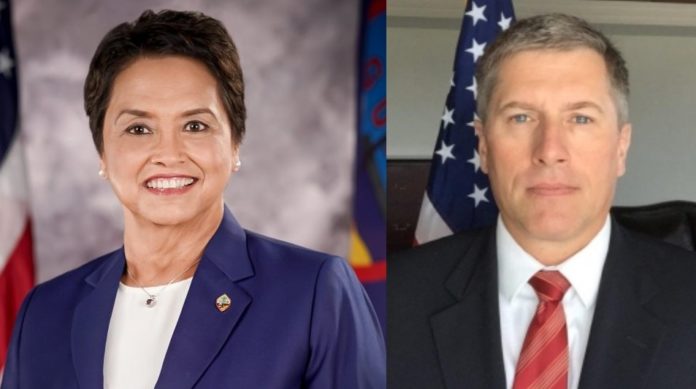 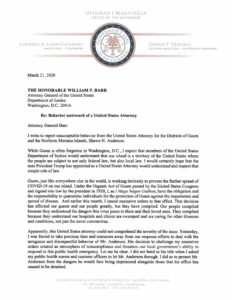 Governor Lou Leon Guerrero has written a letter to U.S. Attorney General William Barr asking him to remove Shawn Anderson from his position as the U.S. Attorney for Guam and the CNMI because he refused to comply with the quarantine order after arriving at the Guam International Airport Saturday.

In her letter to the U.S. Attorney the Governor accuses  Anderson of “arrogance” and “disrespectful behavior” by challenging her recent Executive Order requiring a two week quarantine.

Anderson came in on a flight from Japan when, the Governor’s Press Secretary Krystal Paco-San Agustin says “he refused to comply” with the “mandatory quarantine protocols” that are now in place.

“Guam, just like everywhere else in the world, is working tirelessly to prevent the further spread of the coronavirus,” wrote the Governor to Attorney General Barr.  But “apparently, this United States Attorney (Shawn Anderson) could not comprehend the severity of the issue.”

She called his behavior at the airport “unacceptable.”

“I was forced to take precious time and resources away from our response efforts to deal with the arrogance and disrespectful behavior of Mr. Anderson,” wrote the Governor. “His decision to challenge my executive orders created an atmosphere of non-compliance and threatens our local government’s ability to respond to this public health emergency.”

“I did not bend to his title when I asked my public health nurses and customs officers to let Mr. Anderson through,” wrote the Governor. “I did so to protect Anderson from the dangers he would face being imprisoned alongside those that his office caused to be detained.”

Paco-San Agustin confirmed that Anderson “did not submit to quarantine.” She also said that Anderson “also appears to have provided a non residential address in an attempt to avoid monitoring by public health.”

The Governor concludes her letter by “respectfully” requesting that Attorney General Barr “join in my demand to have Mr. Anderson removed as the United States Attorney for the Districts of Guam and the Northern Mariana Islands.”