Governor Lou Leon Guerrero has sent letters to both of Guam’s utilities, asking them to delay any disconnections of power and water. 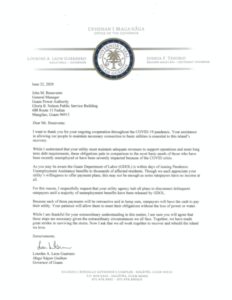 The Guam Power Authority and Guam Waterworks Authority announced this month that with the current health emergency set to expire on June 30, disconnections for unpaid bills will start again on July 1.

In her letters, the Governor explained that the Guam Department of Labor is beginning to roll out unemployment benefit payments but that until they get through the majority of the payouts, some residents have no income at all right now.

Leon Guerrero said she knows the utilities have already been accommodating, and while she appreciates them offering to set up payment plans for those who cannot pay in full, it’s simply not enough for those without any money at all.

She asked GPA and GWA heads John Benavente and Miguel Bordallo, respectively, to hold off 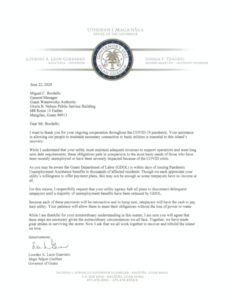 on any disconnections until the majority of unemployment payments are made, explaining that PUA/FPUC benefits will be lump-sum payments to start, meaning ratepayers will be able to catch up on bills.

GDOL has told PNC News that some initial claim payments are to the tune of $10,000.

In response, Consolidated Commission on Utilities Commissioner Simon Sanchez told PNC News that the CCU and management discussed the matter.

They are clarifying that despite an earlier release from the utilities saying ratepayers only had until June 30 to negotiate payment plans, no mass disconnections will occur July 1.

Sanchez said, “nonetheless, we are encouraging all ratepayers who may have become delinquent during the loss of income caused by COVID-19 to come in to negotiate payment plans.”

He says disconnections may begin in July, however not until, or unless, a ratepayer decides not to negotiate a payment plan in July.

“[Utility] management announced that over 100 payment plans already have been negotiated and more are being negotiated each day,” said Sanchez.

He said both GPA and GWA will continue to encourage the public to come in and negotiate payment plans as soon as possible.

“We agree with the Governor that the released PPP, PUA/FPUC and tax refunds and other smaller programs will greatly assist delinquent ratepayers in coming as current as possible, while still allowing them to negotiate a payment for any remaining balance, for at least 6 months and possibly twelve month,” said Sanchez.

He said Guam Power and Guam Waterworks will use the month of July to allow delinquent ratepayers to negotiate payment plans.