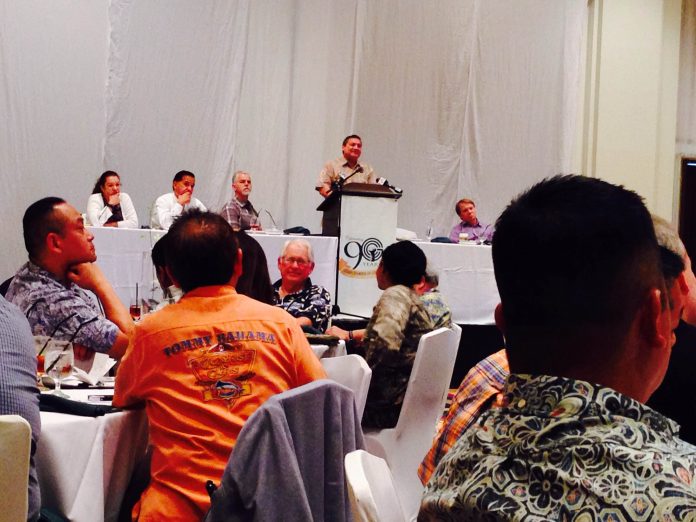 As the Guam Chamber of Commerce welcomes the new year, Governor Eddie Calvo earlier this afternoon told them he’s hopeful about what’s ahead for the island.

Governor Eddie Calvo was the guest speaker today at the first Guam Chamber of Commerce meeting of the year, where he brought stakeholders up to date on tourism, the military build up and capital improvement plans among other topics.

He says Guam can look forward to a lot of economic activity. In fact, he says our island looking at about $13.3 billion dollars of construction over the next 13 years.
Governor Calvo says, “With utilities, we have about $3.3 billion through GWA and GPA. GWA is looking at about $400 million in infrastructure investment to meet the Clean Water Act and GPA is planning nearly a billion, about $850 million in capital improvements.”
As for tourism, the island’s leading industry, despite some annual reductions in our largest market from Japan, Governor Calvo says he still expects to meet the Tourism 2020 goal of 2 million visitors to the island by the year 2020.
Governor Calvo says, “What I heard from GEDA, we received three letters of interested in applying for those Qualifying Certificates.That adds up to about 800 rooms when you add those three potential developers so we’re almost at 50% of what our desire is for 1600 rooms and moving on to our vision of 2 million tourists.”
Governor Calvo says 2015 is the time to strengthen the island in terms of infrastructure and the quality of life for its people.