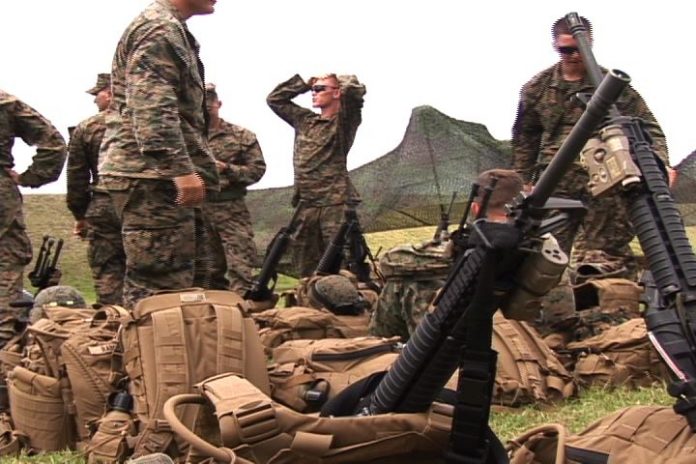 Guam – The islands leaders are reacting to the release of the Final SEIS for the guam military buildup.

Governor Eddie Calvo used his weekly address to do just this. He called the long-anticipated move of marines to Guam an opportunity to seize the day and an opportunity to improve lives for Guam families. In his address, Calvo says Guam has done well for itself even without the buildup, but called it a mistake to “trade in our self-confidence for a few pennies of progress.” The Governor also said, “Again it is good we are a patriotic people. Again there is gonna be so much positives to our economy and it will build stability for the region.”

Legislative buildup committee chairman Senator Frank Aguon Jr says the new preferred alternative outlined in the Final SEIS reduces the amount of vegetation and native limestone forest that would have to be cleared.

A better ‘Hafa adai’ for the Marines

It’s finally here. Yes, I’m as excited as the next person. And we should seize this day; seize every opportunity that we can make for our families and for America.

This buildup started nearly a decade ago. We waited with baited breath until it came to a screeching halt five years ago. It has been some time since then. We’ve come a ways since then. The country should be proud of our journey of discovery all these years. The abrupt halt in the buildup five years ago left many people wondering what we’d do without it. We were so enamored by the promises and grandeur of Buildup I. When we had to face its slowdown, we also had to face the fact that our government pegged the future of this land on what the military planned. We surrendered control of our posterity to someone else’s plan. And so, when the military told us the plans were changing, we were left alone in front of the mirror, our reflection hidden behind the fog of doubt.

Four years ago, when I took my oath, I asked you to replace that doubt with confidence in Guam and in ourselves. It was not an easy journey, but here we are. We now await the Record of Decision – the Final Environmental Impact Statement is issued. The military buildup is happening, and we are in its advent.

But we are a different Guam from the territory we were when we waited for Buildup I. We didn’t wait for this buildup. We fortified our government. We fixed our financial house while the nation’s woes continue. We built our industries. We created jobs. We increased wages. We went to work and built an economy that is growing stronger by the day. We held ourselves to account for our society, and we built a community more resilient to adversity.

We’ve done well for ourselves without the buildup. We’ll do better with it. But it will be a mistake if we trade in our self-confidence for a few pennies of progress. Don’t let any Guamanian fall for the myth that our voice and our contribution doesn’t matter. These past five years, all of us, proved wrong all those who ridiculed Guam. And we did it by being ourselves – working hard – believing in what we can do – encouraging our kids to be proud – to embrace the Chamorro culture – to be banidosu.

So, my fellow Guamanians, my fellow Americans, this time the Hafa adai we use to greet the Marines comes from a collective voice that is stronger and filled with confidence. Our welcome to them comes from a place of sincerity and spirit of inafa maolek – and not from the motivation that we need the economic benefits the military brings. We welcome the Marines because we appreciate their service, because we want them to live in this paradise with us. And also because we have something to offer our country, and we have a role to play in the security of the free world and the plight of freedom lovers everywhere.

Even the largest buildup of the mightiest military in the world should not deter our agenda. Let us carry on where we left off yesterday. Let us build the Guam that we imagine and move ourselves forward by our industry and innovation.

Have a beautiful week in paradise, my dear people. God bless you always.

(Sunday, July 19, 2015, Hagåtña, Guam)In an effort to provide feedback to the public of the potential environmental impacts for the preferred alternatives in the Final Supplemental Environmental Impact Statement (SEIS), including the Live-Firing Training Range Complex (LFTRC) at the Northwest Field, the Main Cantonment at Finegayan, and the Family Housing at Andersen Air Force Base (AAFB), Senator Frank B. Aguon, Jr. issues the following statement:

“With the location of the Main Cantonment Preferred Alternative at Finegayan, and the location of the Family Housing Preferred Alternative at Andersen Air Force Base (AAFB), all efforts to preserve hundreds of acres of overlay refuge and limestone forest have been attained and any efforts towards recapitalization should result in greater efficiencies,” stated Senator Aguon.

This new preferred alternative would reduce the amount of vegetation that would have to be cleared, present additional opportunity for forest enhancement mitigation, maintain the natural buffer area between developed areas and nearby sensitive coastal resources, and leverage existing family housing support facilities already in place at AAFB (ES-15; Guam Final SEIS July2015). (Refer to attachment Figure ES-5)

Senator Aguon further stated, “While the LFTRC remains at the Northwest Field, efforts to minimize the safety buffer over the wildlife refuge are on-going with the Department of the Navy (DON) and U.S. Fish and Wildlife Services (USFWS). Moreover, I look forward to reviewing the Training Range Review and Analysis (TRRA) which should be published as early as the ending of next week.”

The DON and the USFWS had signed a Memorandum of Agreement in June of 2015, with the DON committing two million dollars ($2M) per year towards management activities on the 5,234 acres of survival and recovery habitat on Guam.