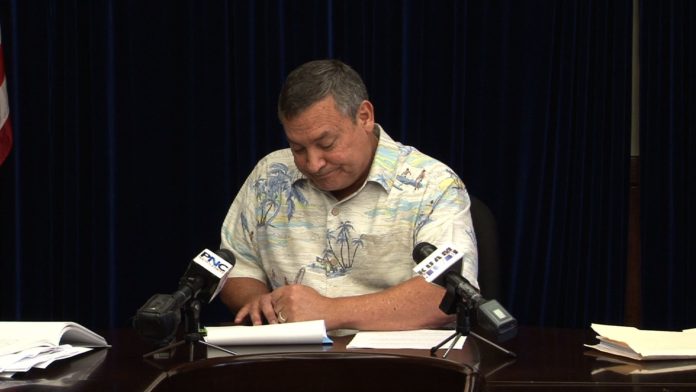 The governor thanked the Republican and Democrat senators who voted in favor of the measure saying it will now provide GovGuam with a road map to recovery. However, he was quick to point out that GovGuam is not out of the woods yet. The actual cash from the BPT increase won’t be received until May 20th which means they will still have difficulty making payroll until then. Even with this infusion of cash GovGuam will still be about 37 million dollars short for the fiscal year because the estimated revenue from the tax will be about 30 million dollars while the total shortfall is about 67 million dollars. Because of this the governor says all the cuts he’s made thus far like the non-renewal of 40 limited term appointment or LTA employees, the closure of two fire stations, the Hagatna police precinct, the public pools, and parks, will all remain in effect. Adelup will also continue their voluntary 32-hour work week cut in salary. The governor says although they have cut their salaries to reflect a 32-hour work week he and his staff are still working full weeks.

“Every day of inaction is one day lost and the crisis would worsen. I do believe that if we had acted sooner you would have seen not the types of reports that we are getting out of Standard and Poors as well as Moody’s in terms of a negative credit watch,” said Governor Calvo adding, “I wanna thank the senators. They have given the governor the authority to move forward on reorganization. So, this is a way for us to look at our government operations and to reorganize with this extra authority so that we can build a government that is run more efficiently with cost savings and provides better services.”

The governor says he is confident that they will right the ship of state, he is happy that GMH will finally get the subsidy it needs, and he says GDEO will not have to make the drastic 19 million in cuts it was looking at making. As far as the 30 to 37 million in cuts that are needed, the governor said the fiscal realignment plan will be turned in before April 1st and he says he will work with the legislature on consolidating agencies, reorganizing and potentially reducing the GovGuam workforce.