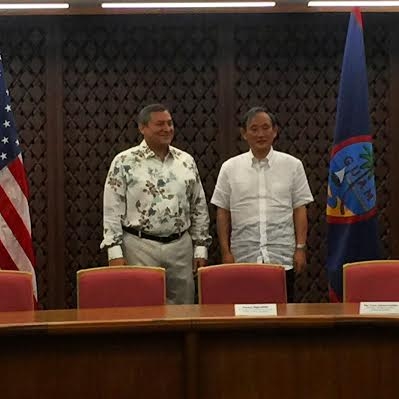 Governor says if U.S. programmatic agreement isn’t kept Guam may have to “start from square one”

After meeting with Congresswoman Madeleine Bordallo about the military buildup yesterday(Thurs.) Suga met with the Governor today(Fri). The Governor said his administration has always supported the buildup but he voiced some of the concerns he learned of when meeting with members of the community who are opposed to the buildup last week. The Governor told Suga he will look into the concerns brought up by anti-buildup groups. The Governor says he’s concerned that the U.S. federal government won’t honor all of the commitments they made to Guam in a programmatic agreement signed with Calvo during his first year as Governor of Guam. This agreement was signed by then undersecretary Robert Work who is now the U.S. Deputy Secretary of defense. The Governor has heard word that the U.S. government might not fund a cultural repository and public health lab as they had promised. “If commitments are not kept for whatever reasons there are and an agreement is broken then there is no agreement then we have to maybe start from square one,” said Governor Calvo.

In the end the Governor hopes that the U.S. federal government sticks to it’s commitments to fund a cultural repository and public health lab for Guam.