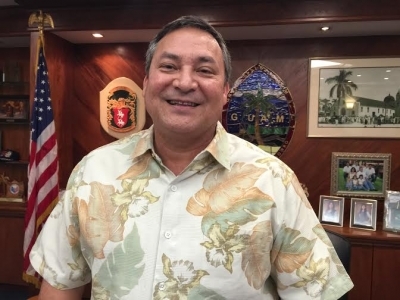 The governor is back from a two-day trade mission to the Philippines and according to him, people around the world are closely watching Guam.
Governor Eddie Calvo says he met with top business people from Asia and Europe and found it surprising that they are aware of our island. Calvo says they are impressed that Guam is sustaining their economy on their own, but he says that the stakeholders are particularly excited about the upcoming military build up. Calvo says he met with top business developers such as Global Criterion Solutions and Ayala Land during his trip. In the governor’s weekly address, he stresses the importance of trade missions because he says it allows Guam to promote itself as a strong investment destination and showcase our island’s tourism and economic development potential.
Calvo says, “Because really, there isn’t any reason why we can’t compete in the global market against other communities. Just last week, we announced that our tourism industry has seen another banner month. May 2015 is the sixth best May in the history of tourism, with 96,873 visitors. That’s the result of a lot of hard work.”
Calvo says the administration is working hard to boost our economy by pulling more investors and exploring other industries as potential revenue sources.