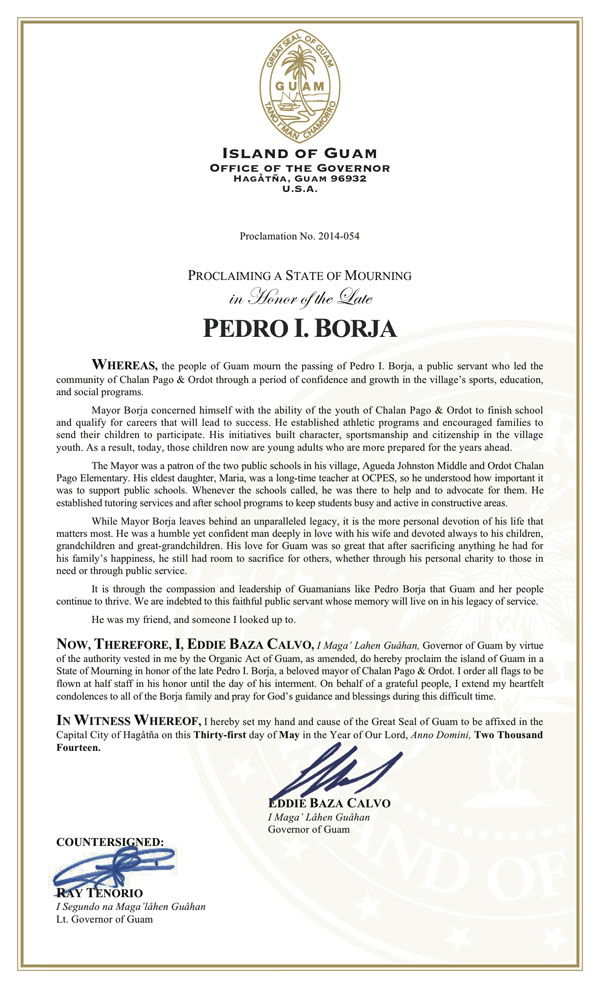 Guam – Governor Calvo has declared a State of Mourning in honor of the late Pedro Borja, former Mayor of Chalan Pago & Ordot.

Lt. Governor Tenorio added, “Our families pray for his soul. We pray also that God’s hand will lighten the pain and suffering of his family and friends  who shared with us the respect we all extended to this Saina and beloved leader.

Whereas, the people of Guam mourn the passing of Pedro I. Borja, a public servant who led the community of Chalan Pago & Ordot through a period of confidence and growth in the village’s sports, education, and social programs.

Mayor Borja concerned himself with the ability of the youth of Chalan Pago & Ordot to finish school and qualify for careers that will lead to success. He established athletic programs and encouraged families to send their children to participate. His initiatives built character, sportsmanship and citizenship in the village youth. As a result, today, those children now are young adults who are more prepared for the years ahead.

The Mayor was a patron of the two public schools in his village, Agueda Johnston Middle and Ordot Chalan Pago Elementary. His eldest daughter, Maria, was a long-time teacher at OCPES, so he understood how important it was to support public schools. Whenever the schools called, he was there to help and to advocate for them. He established tutoring services and after school programs to keep students busy and active in constructive areas.

While Mayor Borja leaves behind an unparalleled legacy, it is the more personal devotion of his life that matters most. He was a humble yet confident man deeply in love with his wife and devoted always to his children, grandchildren and great-grandchildren. His love for Guam was so great that after sacrificing anything he had for his family’s happiness, he still had room to sacrifice for others, whether through his personal charity to those in need or through public service.

It is through the compassion and leadership of Guamanians like Pedro Borja that Guam and her people continue to thrive. We are indebted to this faithful public servant whose memory will live on in his legacy of service.

He was my friend, and someone I looked up to.

Now, Therefore, I, Eddie Baza Calvo, I Maga Lahen Guahan, Governor of Guam, by virtue of the authority vested in me by the Organic Act of Guam, as amended, do hereby proclaim the island of Guam in a State of Mourning in honor of the late Pedro I. Borja, a beloved mayor of Chalan Pago & Ordot. I order all flags to be flown at half staff in his honor until the day of his interment. On behalf of a grateful people, I extend my heartfelt condolences to all of the Borja family and pray for God’s guidance and blessings during this difficult time.

In Witness Whereof, I hereby set my hand and cause of the Great Seal of Guam to be affixed in the Capital City of Hagatna on this Thirty-first day of May in the Year of Our Lord, Anno Domini, Two Thousand Fourteen.