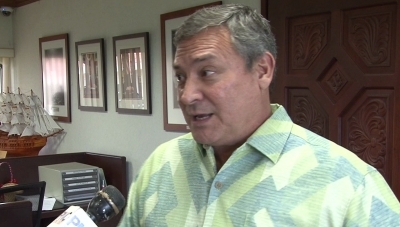 (Adelup) — Governor Calvo has commuted the sentence of three men, triggering their deportation in his continued effort ensure the safety of all Guam residents.

U.S. immigration officials identified Jowakim Kintin, Erty Eidaro, and Jesvy Saimon as having committed deportable crimes. Their files were flagged with a federal detainer. Police notified the victims who noted their support of the deportation of the four men.

With their commuted sentence, the Department of Corrections is transferring them from the local prison into the custody of federal officials, which also means the federal government will take over the cost of their detention and subsequent procedures that are part of the deportation process. It costs about $119 a day or more than $43,000 a year to house each individual at the Department of Corrections.

“This partnership with the federal officials is helping us to ensure the safety of all Guamanians,” Governor Calvo stated. “We must take whatever steps are available to us to protect our residents. I want to thank the Guam Police Department, the Office of the Attorney General, the Judiciary and our federal partners for working together to improve public safety.”

October 22, 2020
@PNCGUAM INSTAGRAM
MUSIC IS THE CURE! A SHOWCASE OF MUSIC AND LIFE