Governor Lou Leon Guerrero has reacted to the legislature’s override of her budget bill veto, saying the approved fiscal plan could mean cutbacks at Public Health in the midst of the COVID pandemic. 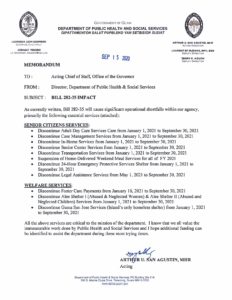 “The Speaker is right. There is that potential of either layoffs or cutting back in hours. Right now, we’re just doing a whole analysis,” the governor said in an interview with NewsTalk K57.

While the Governor says she’ll do everything she can to prevent any cutbacks, she says it’s not a sure thing.

“Public Health alone in its operation was decreased by about maybe 29% to 30% and what that translates to is you’re either going to have to look at your services or you’re going to look at your personnel,” Leon Guerrero said.

She added: “Public Health did an analysis on services that would be cut off after the end of the first quarter of our fiscal year. And I’ll just briefly say that those are: the adult-based services, case management services, in-home services for senior citizens, transportation for senior citizens, and home-delivery meals…they won’t be able to do much of that, it’ll be on suspension. They would discontinue the 24-hour protective services for our manamko. They would have to discontinue legal aid. On welfare services, foster care payments are going to be impacted.”

Of the flip side, the governor says if Public Health were to continue all the services, then staffing would be affected.

The Governor says the main divide between the senators and Adelup comes down to an additional 1% in the total revenue, which Leon Guerrero says she’s confident Guam will receive…

“I’m just reviewing some economic analysis that was done and it looks pretty hopeful for 2021. So we will get those types of revenues in from military spending, federal government spending, and local government spending. In the meantime, of course, we’re going to work very aggressively to get our tourism industry back,” Leon Guerrero said.

She added: “The military is going to pump in, through the military build-up in the next 10 years, $8.6 billion. That’s about $840 million a year in just construction.”

The governor says she tried to convince the senators that the additional $7 million in revenue she requested will come for Guam over the next fiscal year.

“What they want to do is do increment budgeting. How can you plan for services and personnel with incremented budgeting? That’s unheard of,” Leon Guerrero said.

In the current 2020 fiscal year, Leon Guerrero says Adelup is already tracking a surplus in withholding taxes because of the PUA and FPUC injections from the feds.

As for her transfer authority of money between agencies that she’s granted as a Governor, Leon Guerrero says:

“If I have the monies to transfer of course I will! But the way the budget is now, there are no monies. Every agency is decreased…every agency,” Leon Guerrero said.

When asked about taking from agencies that are not as essential as Public Health, the governor says she “runs a lean government” and that there’s no excess staffing anywhere to cut.