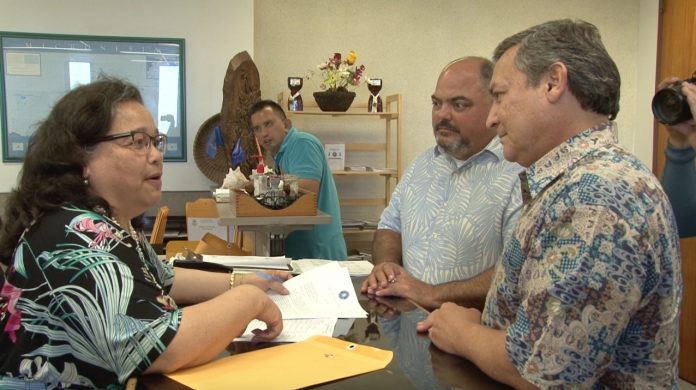 Guam – Making good on his word, Governor Eddie Calvo showed up at the Guam election commission to submit a letter of intent that he says starts the process to finally submit a voter referendum on Guam’s political status.

“I’ve started the process of moving forward finally after a decades long wait and delays in a process for political self determination,” said Calvo.

The question has been an elusive one, what is Guam’s political status?

Governor Eddie Calvo yesterday promised an aggressive campaign to once and for all put Guam’s political status up for a vote.

“We finally have the agreement from the federal government on the additional funding to fund an education program and I’ve been getting these sentiments from many portions and part of the community. Speaker Won Pat and Senator Respicio have again indicated to me their desire to move forward in this process,” said Calvo.

This bipartisan support includes Congresswoman Madeline Bordallo, who made the same passionate plea to determine Guam’s political status in her state of the union speech. Calvo says the legislature has appropriated $250,000 and the federal government gave $500,000 to go towards an education campaign on Guam’s political status. Calvo, as chairman of commission of on decolonization, said yesterday he has ordered his staff to design the education campaign.

“There’s more than enough time to get an education program put together, with the cooperation from the university of Guam, as well as the select different status group organizations and working with the communities as a whole to get the education program out to the people of Guam,” said Calvo.

“Based on the requirements stated by the Guam election commission, we have to get these public meetings out, getting the input of the people of Guam, an impact study. Of course we need 7-thousand plus signature, that’s a lot of work, so I’m excited,” said Calvo.