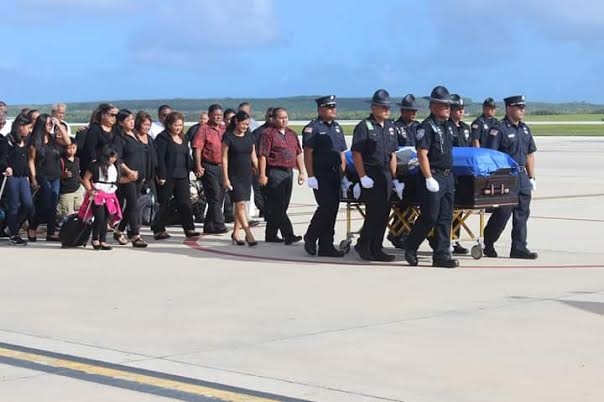 Saipan – The leader of the CNMI was laid to rest today his family, constituents, and dignitaries witnessed his burial and looked back at the life he lived as a public servant as newly sworn in Gov. Ralph Torres and Lt. Gov. Victor Hocog prepare to lead the Commonwealth for the rest of Inos’ term.

The CNMI laid to rest Governor Eloy Inos today at the Chalan Kanoa Cemetery, celebrating the life he lived as a public servant while mourning the loss of the 8th governor of the Commonwealth. Inos’ remains arrived on island last Friday accompanied by his family and greeted by dignitaries from across the Pacific and the U.S mainland as well as countless CNMI residents.

In a similar scene this morning, the Governor’s body arrived at Mt. Carmel Cathedral in a motorcade preceding a holy rosary and special presentation by Guam Governor Eddie Calvo, in honor of the friendship between the Governors and their islands.

“I had an opportunity to work with him. Governor Inos came in a time when there was a lot of dynamism, but I felt he brought a lot of stability. I was proud to work with him,not only with Guam but also issues dealing with the federal government and our brothers and sisters in other Micronesia regions,” said Governor Calvo. Calvo explained that in a time of great transition, when then Gov. Fitial resigned, Inos remained steadfast. “What I saw in Governor Inos was stability. He was a man that had a lot of knowledge and was bale to again bring stability to the island.”

Calvo was joined by Chief Justice Robert Torres, Archbishop Anthony Apuron, and several other Guam, local, and off-island officials the viewing and mass of Christian burial this afternoon.

According to Gov. Torres’ administration, Governor Inos began his public service career as Tax Manager for the Trust Territory of the Pacific Islands’ Revenue Division and quickly moved-up to hold the position of Secretary of Finance – a position which he served in under three different administrations. Inos also worked in the private sector as a former Vice-President of Tan Holdings Corporation. He was elected to office and served in the First Saipan and Northern Islands Municipal Council, including a term as Council Chairman from 1990 until 1992.

CNMI residents recounted his life-long commitment to public service today while still mourning the loss of a pillar of the island community. Inos was 66 years old.