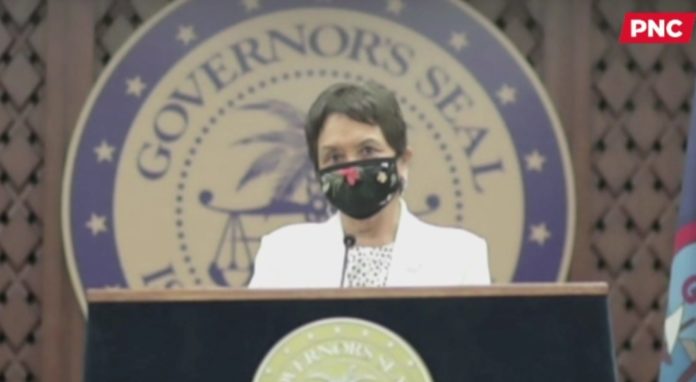 Governor Lou Leon Guerrero announced Thursday that she will be extending Guam’s Stay-at-Home order by one more week, until 12 pm on Friday, September 18. No further restrictions will be eased at this time under the current PCOR 1/Stay-at-Home order.

This is now the third extension of the lockdown, which initially came into effect on Friday, August 21, and was meant to end at 12 pm on August 28.

It was then extended until Friday, September 4, with some restrictions eased such as banks resuming face-to-face operations, construction getting back to work outside the fence and public parks/beaches reopening for individual exercise.

Last Friday, as the Governor announced the island’s 14th COVID-related death, she also extended her executive order until tomorrow, Friday, September 11 at 12 pm.

However, with deaths being recorded daily, new cases not declining as quickly as she’d hoped, and hospitalizations still increasing steadily, Leon Guerrero says the island must stay the course one more week, until Friday, September 18 at 12 pm.

At a news conference Thursday morning, the Governor said, “In less than one month, we’ve lost 16 people to the virus. And, 70% of our cases were recorded in August and September alone. There are currently over 50 COVID-patients being treated at GMH; 12 are on ventilators.”

“COVID-19 doesn’t just affect the sick and the elderly—it’s infecting the young, the active, the otherwise healthy. It can affect your neighbors, your coworkers, your friends, your family, and even you,” she added.

Ironically, the extension comes the same day as a “People’s Protest” at Chamorro Village starting at 4:30 pm. Demonstrators say they’re speaking out against the current lockdown.

Protesters say they’ll be socially distanced and wearing masks.The demonstration gets started at the Chief Kepuha statue in Hagatna.

Jeff Pleadwell, of Jeff’s Pirates Cove, says they’re hoping for close to 1,000 people so that, with arms stretched out (spaced apart), they could reach Adelup.

The governor made the extension announcement at a news conference, where she also launched the Guam COVID alert app. The smartphone app uses Bluetooth wireless signals to figure out when a resident could have been in contact with someone who has tested positive for COVID-19.