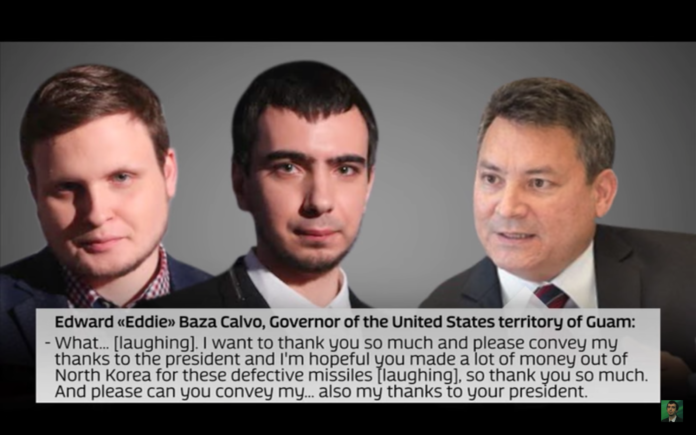 “I’m hopeful you made a lot of money out of North Korea for these defective missiles,” the governor told the prank callers posing as the Ukraine Prime Minister.Guam – Be careful with who you talk to.  Adelup could have heeded that advice sooner, as Russian pranksters posing as the Ukrainian prime minister managed to get past Adelup’s layers of security and speak with Governor Eddie Calvo—who apparently took the bait.

The 8-minute conversation was posted on the pranksters’ YouTube channel Wednesday and in it, the two discuss the missile crisis in North Korea and Ukraine’s involvement.  The comedians tell the governor that they did in fact supply missiles to Pyongyang.

“I would like you to be the first to learn the information that will be conveyed to the President Trump tomorrow,” the prankster says.

“Oh my,” Governor Calvo reacts, “that is unfortunate and again we are hopeful now that maybe the flow of any type of armament to North Korea will be halted.”

The prank callers then reveal the missiles they supplied to Pyongyang are of poor quality.

“I have to assure you that over the last twenty years we have faced challenges in military research and development and a very huge number of parts have been stolen … I’m very familiar with our missiles and rest assured that none of Ukrainian made missiles will reach their targets,” the fake PM says.

“That is very good news,” Calvo responds, “That I’m glad that you’ve been able to be very clear that the technology and capability of these missiles are insufficient for Guam.”

When the fake prime minister tells the governor that the sale of the missiles was a set up in order to rake in cash and that he “duped these Korean folks,” Governor Calvo appears impressed and even grateful.

“What,” the governor says in disbelief.

The two then talk about tourism and the strengthening of the two nations’ relationship.