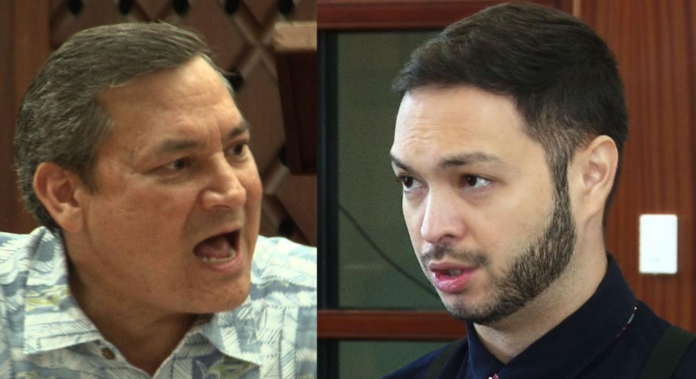 “I consider that a sin –a sin on the people of Guam for [Sen. San Nicolas] to come up with this hair-brained idea.” –Governor Eddie Calvo

Guam – Another public disagreement between Senator Michael San Nicolas and Governor Eddie Calvo, this time over the Democrat lawmaker’s request that the federal government dole out Section 30 tax revenue quarterly.

“For Senator San Nicolas to request that the government of the United States not make the payments up front, but pay it over a year in increments is again a slap in the face of the people of Guam and not just our administration, but also future administration,” the governor contended.

He adds that to go to Congress and ask them not to pay us just because Senator San Nicolas believes that we can’t manage our affairs isn’t good optics for the island.

He continued saying, “There is already the weight from unfunded federal mandates that have been placed on us. You top that with $1.4 billion on Clean Water and Clean Air Act provisions and now to withhold federal money from us? I consider that a sin –a sin on the people of Guam for [Sen. San Nicolas] to come up with this hair-brained idea. That’s all it is,” Governor Calvo argued.

Meanwhile, Senator San Nicolas tells PNC: “Governor Calvo’s unwillingness to fix things and insist on a Puerto Rico outcome for Guam is the only leadership failure and no one is laughing.”

In response to Resolution 76’s unsuccessful pass in senate, the Democrat lawmaker wrote in a press release:

“Resolution 76-34 sought to spread out Section 30 funds to improve cash flow of the Government of Guam so it can get in the hands of our people in the form of tax refunds as they file and not have to wait until the end of the year.  By continuing the government’s practice of spending next year’s money today, this government will continue to short itself and short tax refunds year after year.  We could have broken that cycle.”

He added, “More taxes, debt and deficits will continue to threaten our people because we cannot put pride and politics aside to do what’s necessary.”