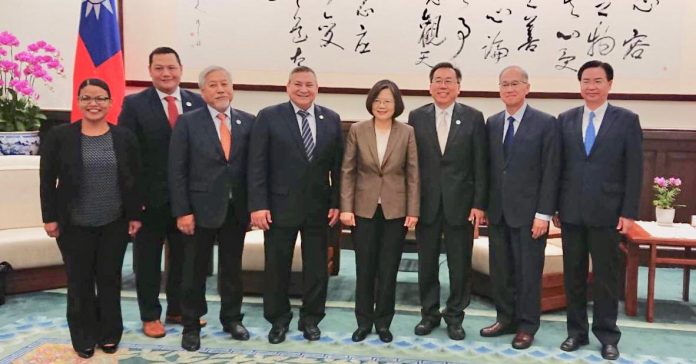 Guam – In the midst of an emergency session to avert a fiscal crisis, Governor Calvo is taking a trip to Taiwan reportedly to meet with officials for an economic trade mission.

Adelup issued a release today announcing the governor’s trip to Taiwan—a trip he’s taking in an effort to “increase airline seat capacity for visitors wanting to vacation or do business on Guam.”

The governor left on Sunday and will be returning next Sunday, according to Adelup Spokeswoman Oyaol Ngirairikl. Along with the governor for this trip is Guam Economic Development Authority Administrator Jay Rojas, one GEDA staffer and one executive security officer for Governor Calvo.

According to Ngirairikl the trip is paid for with GEDA funds. GEDA is partially funded through the qualifying certificate program.

The governor is scheduled to attend the 2018 Austronesian Forum with cultural representatives from the Asia Pacific region. He will also be meeting with representatives from China Medical University, Taiwan Agriculture and Fishery Co-op, the Shrimp and Orchid Farm and LihPao Investments which is investing in a $70 million hotel in Tumon.

We asked Ngirairikl to provide us with the cost for this trip, to include airfare, accommodations, per diem and any overtime. She told us she would follow up with those numbers and get back to us at a later time.

You can read the release from Adelup below:

Governor Calvo today is meeting with China Airlines President Su-Chien Hsieh and Senior Vice President Steve Chang in an ongoing effort to increase airline seat capacity for visitors wanting to vacation, or do business, on Guam.

The Governor is in Taiwan this week on an Economic Trade Mission to help promote the island to various industries and investors.

“The amount of investment in Guam has increased our economic activity, increased jobs, and helped improve the quality of life for our community,” Governor Calvo stated. “We continue to promote our island to tourists and potential investors with the goal of building up a sustainable economy – and maybe we don’t see the fruits of it today but the seeds we plant now will benefit the future.”

While there Governor Calvo also met with Taiwan President Tsai Ing-Wen and Taipei City Mayor Ko Wen-Je to commemorate 45 years of sister-city relations. Groups from Taipei have visited Guam on various occasions to share traditions, there is a belief that both communities share cultural roots. The Governor, in his discussion with President Tsai Ing-Wen, raised the issue of considering the re-opening their Taiwan Economic and Cultural Office on Guam.

Tomorrow, the Governor will participate in the 2018 Austronesian Forum with cultural representatives from the Asia Pacific region.

His agenda for the rest of the week includes meetings with:
• China Medical University Hospital
• Taiwan Agriculture & Fishery Co-op
• Shrimp and Orchid Farm
• LihPao Investments (investors of a new $70M hotel in Tumon)

The Economic Trade Mission was organized by the Guam Economic Development Agency as part of their mission to develop a sound and sustainable economy through innovative programs that preserve and promote local culture, economic opportunities, and quality of life.

“The influx of real estate investment and business enhancements by Taiwan investors have increased in the past seven years,” said Guam Economic Development Administrator Jay Rojas. “And a commitment from President Tsai to reopen the Taiwan Economic and Cultural Representative Office on Guam is key to building on established relationships.”