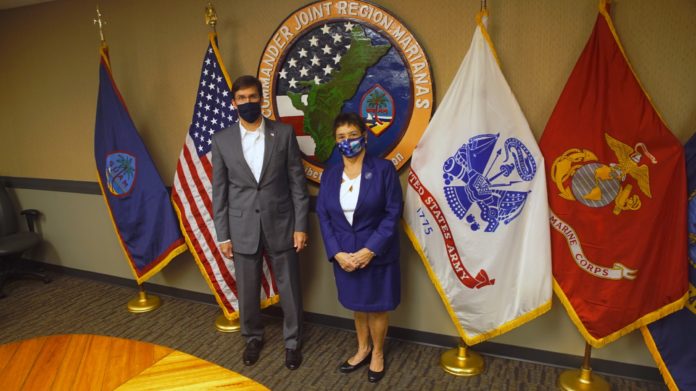 Governor Lou Leon Guerrero, in a meeting with the U.S. Secretary of Defense Mark Esper on Saturday, provided an update on Guam’s response efforts to COVID-19 in addition to making several requests to improve the quality of life for the people of Guam. The meeting was held at the Joint Region Marianas Headquarters in Nimitz Hill and hosted by Rear Adm. John Menoni, commander, Joint Region Marianas.

Governor Leon Guerrero expressed the need for a public health laboratory to serve Guam and neighboring islands. She has made a request for the return of excess land to build a modern medical complex on the island, which would encompass a new hospital and Public Health facility.

The discussion also included the necessity of improvements at the ship repair facilities and the possibility of 5G expansion and telecommunications.

To accomplish these goals, Governor Leon Guerrero expressed the need for an accessible and affordable labor force. Due to Guam’s size and the strong military presence, she reiterated that all Guam projects, inside or outside the fence, are military related. Governor Leon Guerrero requested for support to allow for the use of H2B workers from the Philippines for all projects on the island.

Secretary Esper discussed plans regarding U.S. presence in the Pacific and wanting to make the most effective footprint and defense in the region and how they were exploring different options to accomplish that goal. It would involve investing heavily in the region and creating a stronger network with the U.S. territories and sovereign Micronesian states.

“As the tip of the spear and first line of defense in the Pacific Region, Guam must have a stronger voice in military discussions,” said Governor Leon Guerrero. “A good partnership does not leave either party in a deficit, and with the support of the Department of Defense, I look forward to working with the military to work on important infrastructure projects. I thank Secretary Esper for his visit to Guam and listening to our concerns.”

“It was an honor to host Secretary Esper and Governor Leon Guerrero at JRM Headquarters in our historic conference room for a productive meeting,” said Rear Adm. Menoni. “The Secretary’s visit reaffirms the valued collaboration with our partners in the Government of Guam, the strategic location of the Marianas, and the critical role that Guam and the Commonwealth of Northern Mariana Islands play in our nation’s defense.”