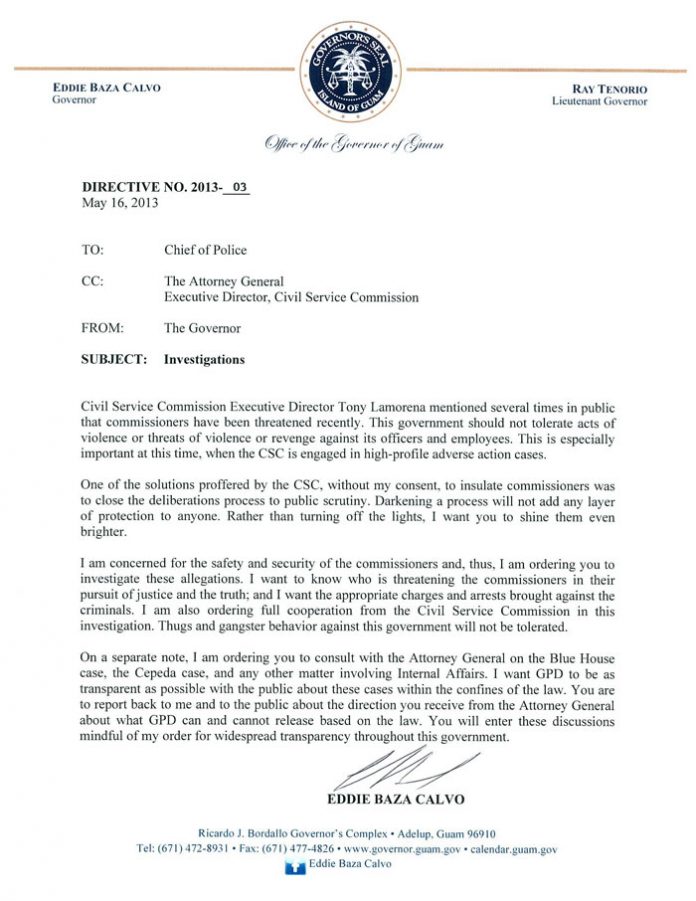 Guam –   Governor Eddie Calvo has ordered Guam Police Chief Fred Bordallo to conduct an investigation into allegations that several Civil Service Commissioner were threatened during the course of their deliberations over adverse action proceedings against various GovGuam employees.

The allegations were made by Civil Service Director Tony Lamorena Monday during a public hearing on Bill #102, a measure that would have allowed the Commission to conduct certain proceedings behind closed doors and would have permitted no record to be kept of the proceedings.

The Governor strongly opposed the measure and vowed to veto it. Senator B.J. Cruz who introduced it said Wednesday that the measure was now dead.

In his letter to GPD Chief Bordallo instructing him to investigate the allegations, the Governor writes that he is “concerned for the safety and security of the commissioners” and he states that “this government should not tolerate acts of violence or threats of violence or revenge against its officers and employees.”

Governor Calvo also ordered Chief Bordallo “to consult with the Attorney General on the Blue House case, the Cepeda case,  and any other matter involving Internal Affairs. I want GPD to be as transparent as possible with the public about these cases within the confines of the law.”