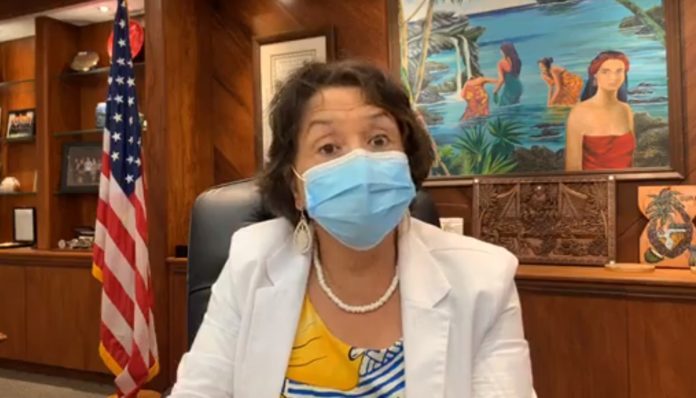 Governor Lou Leon Guerrero this morning said that she will lift some of the emergency social distancing restrictions that are now in place by May 6th.

But she still intends to extend the public health emergency for another 30 days beyond May 5th in order to keep some of the current restrictions in place.

In an interview with K-57’s Patti Arroyo this morning, the governor said the roadblocks may be lifted and she might allow restaurants to open up again and serve customers in house.

“I’m not lifting all of the restrictions,” she said. “I’m only lifting restrictions I feel that are less risky to lift. Then we’ll move forward in May to look at what other restrictions we can lift.”

The Governor said the plan is still to lift restrictions as soon as safely possible. That plan  “is not on hold,” she said, “it continues to be moving forward.”

The public health emergency will be extended for 30 days from May 5th, she said. That would mean the first week of June.

“But that doesn’t mean that restrictions aren’t going to be lifted. Again, its going to be driven by the data. It just means that I continue to have my emergency powers.”

Much will depend upon the results of the expanded testing for COVID-19 that gets underway tomorrow at the Astumbo Gym in Dededo.

The results of the expanded testing program will determine how fast restrictions are lifted.

She also said that she will not be releasing her recovery plan today as earlier announced.

“Our recovery planners have been working over the last two weeks,” said the Governor.

As she announced on April 17, her recovery team is reviewing the recommendations provided by President Trump when he announced his ‘Open America Again’ program, the guidelines provided by the Centers for Disease Control “and other sources,” she said.

The Governor also noted that the Guam Chamber of Commerce has submitted a suggested recovery plan which is also under review.

“That is not the official plan,” said the Governor. “It has not been sanctioned at all, although they have submitted the plan to the panel and they are reviewing that.”

The Governor said she will be meeting with her recovery team today and hopes to have the recovery plan finalized and approved by early next week.

“That’s the plan that will guide us,” she said. “We are going to coordinate one plan and it will be the official plan from the government.”

“As far as the actual implementation of the plan … it’s dependent on the next two weeks on how we are looking on community spread,” said the Governor.

Once she reviews the data from the expanded community testing program, the governor will then determine what restrictions will be lifted and when.  “It’s going to be slow gradual monitored and controlled.”