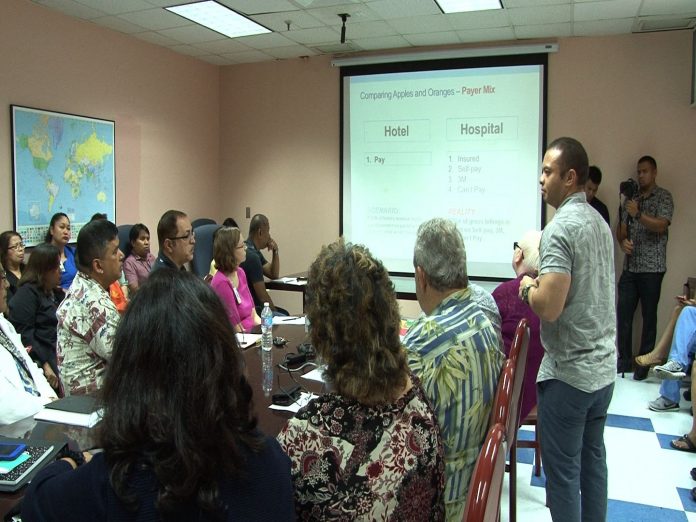 The amount represents $30 million for vendor payables and $125 million in capital improvement projects. However, this amount is only estimated for the first year.

Guam – The governor’s office is planning to ask the Legislature for approval to fund a complete overhaul of the Guam Memorial Hospital. This will include closing out a $30 million debt.

The total cost for all this, some of which will be funded by taxpayer money is $155 million.

Governor Eddie Calvo and the Hospital Management Advisory Team met with GMH employees today to present their plan for what they are calling a complete and total transformation of GMH.

The plan will be sent to the legislature in the form of a bill that will give lawmakers options to choose from in how to finance their plan. So how much do they need?

– $45 million to tear down and rebuild the Z wing of GMH will be turned into an outpatient facility;

– $35 million to appropriately furnish the Z wing. This will include medical equipment, laboratory supplies, diagnostic equipment and other interior furnishings needed to operate the facility;

– $20 million to fully integrate and upgrade the hospital’s IT system;

– $10 million to renovate and expand the hospital’s overcrowded parking structure;

– $5 million for the roof system upgrades;

– $5 million for an automated dispensing system; and

– $5 million for electrical upgrades to their panel

“It really is a comprehensive approach. So the total that we’re going to be approaching the legislature with for this portion of CIP work is $125 million,” explains Lester Carlson, a member of HMAT.

Together with a $30 million vendor payable, the governor’s bill is seeking a total of $155 million. So how exactly do they propose to fund this?

Members of the GMH administration and HMAT say they’ll be presenting the Legislature with a number of options. It will be a mixture of borrowing money, refinancing bonds and raising taxes.

“One of the first things that we’re going to be doing is we’re asking the legislature for authorization to take three existing–two loans and one bond. Right now the interest rate environment is very, very good for refinancing. So step one is to get authorization to refund the existing section 30 bond, a Bank of Guam loan and another bond for the expansion of Okkodo High School. Those collectively will take our existing debt service and bring our cost down because of the savings,” explains Carlson.

“What Governor Calvo has done, and I stated this to the community, is put forward a myriad, a variety of options that may, that do include some tax opportunities for taxes either to be created or to increase existing taxes. But there’s also two provisions within that have nothing to do with taxes. The increase in the fee structure is not a tax. The implementation of an automated ticket trafficking system is not a tax,” says Castro.

However, the experts acknowledge that the bill also proposes a tax hike. How it will be implemented will be up to the legislature.

“So if I go to the grocery store today and spend $100, I’m OK spending $1 more that’s gonna come to GMH. That’s what a four percent to five percent increase would represent. If I were to go to the store today, that’s just one of the proposals. There’s many other opportunities,” says Chris Duenas, a senior staffer at the governor’s office.

The bill was just transmitted to the legislature today at 5 pm. You can read the bill by clicking on the file below.