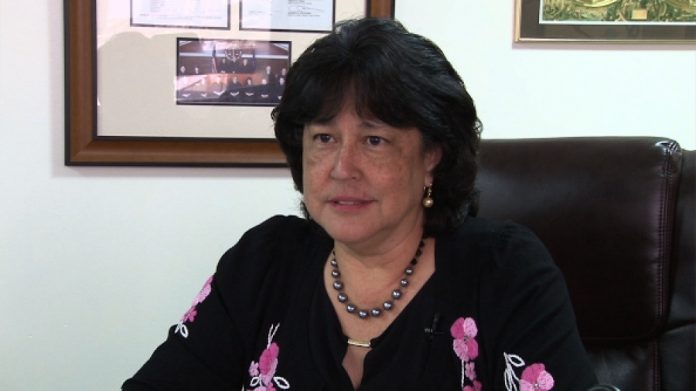 Attorney General Elizabeth Barrett-Anderson refused to participate in a substantial interest declaration that could essentially throw out the procurement protest.

Guam – The governor’s office is defending a decision it made to insert their opinion in the ongoing procurement protest of the $100 million Simon Sanchez High School RFP, saying Governor Eddie Calvo is not sticking his neck out for the intended winner, Guam Educational Facilities Foundation, he’s sticking his neck out for Simon Sanchez High School.

It was labeled the $100 million dollar question, a press release from the governor’s office yesterday questioning Attorney General Elizabeth Barrett-Anderson’s refusal to submit a substantial interest letter that could essentially throw out the protest filed by Core Tech International.

CTI filed the protest on grounds that the Department of Public Works violated procurement law when it awarded the contract to Guam Educational Facilities Foundation and that GEFF failed to disclose a relationship between Governor Eddie Calvo and his first cousin, Eduardo “Champ” Calvo, who has a direct or indirect interest in GEFF through his company which is a subcontractor for GEFF.

PNC: “Why is the governor seemingly sticking his neck out for GEFF, essentially putting his stamp of approval on this contract for them?”

In the press release, DPW Deputy Director Felix Benavente is quoted as saying he is “extremely puzzled” by the AG’s refusal to participate in the substantial interest proposal. That proposal began with GEFF President Richard Inman which then led to a chain of letters of substantial interest from DPW and the Guam Department of Education.

Assistant Attorney General Tom Keeler, who is representing DPW in the procurement protest, also jumped on board. But the only signature left to complete the substantial interest process was from the AG herself, which she refused to do.

PNC: “What does it do, though? Even if you say it’s for the students, it’s for the school, that he’s doing this. What does it do because legally there’s nothing that sending out a message like that could do. If the AG’s Office, if the attorney general herself doesn’t want to do that substantial interest letter, it serves no purpose.”

“I think it does serve a purpose.”

PNC: “Well is he hoping that the AG would maybe change her mind at some point?

“Yeah. And that’s the thing, if, maybe, when you remind folks, ‘Look you had two deputy attorneys general sit in through this entire process and we think they did a good job,'” Ngirairikl explained.

PNC: “Why not just ask her then? Why not just say, ‘Hey, attorney general, we really need this for our students. I urge you to change your mind,’ Because the way that the press release sounded, it sounded like it was more adversarial.”

“This is a public issue and we want the community to know what’s going on. There is a community that relies on us for transparent messaging so that’s what we did. We’re asking the question, albeit publicly, because it’s like, ‘Hey, look, there’s a reason why you had these two deputy AGs.’ It’s something that the people should know. It’s something that people should understand,” Ngirairikl said.

Meanwhile, protest hearings were scheduled to resume today but were postponed to next Monday. Protester Core Tech has already rested its case. Up next to present its case is Department of Public Works.

“DOE has managed with help from several agencies over the years to keep Simon Sanchez from falling apart but really you can’t keep putting band aids on the problem and expect it to stay together for too long,” Ngirairikl noted.

The Attorney General’s Office was not available for comment. Public Auditor Doris Flores Brooks also said she could not comment on the matter, however she did tell PNC that “everyone deserves their day in court.”