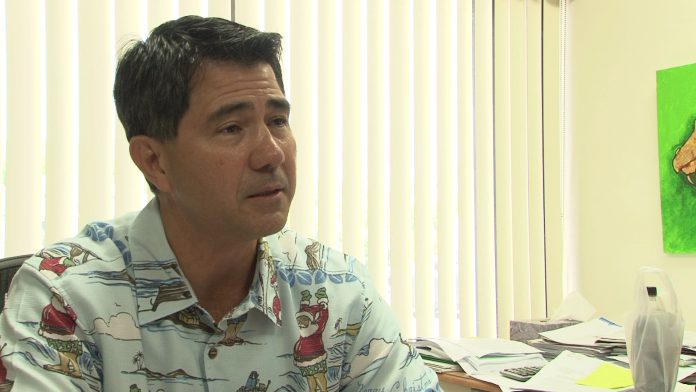 At the request of Vice Speaker BJ Cruz, Attorney General Elizabeth Barrett-Anderson issued an opinion that the “bonuses” Adelup employees got last year was processed as retroactive pay and therefore illegal.

In an opinion released last Thursday, the AG says the one time pay-outs were processed as retroactive pay, which is prohibited by law.

We spoke with the governor’s Chief Policy Advisor, Arthur Clark, who explains how it happened and how they’re going to solve the problem.

“It’s regrettable, again, that it was–the intent was there. The execution came up short,” says Clark.

He explains that the intent was for 107 employees of the governor and the lt. governor’s office to receive bonuses all along. But because Guam law prohibits these unclassified employees from receiving retroactive pay, he says they had to work a way around it by way of one time pay-outs. So the instructions were sent to the fiscal team for the Department of Administration to process.

“It was always understood that we were not trying to make this retroactive because we knew what the legal limitations were,” says Clark. “But their computer, they had computer software limitations, their computer program had some limitations and so in order for them to calculate the pay adjustments, they needed to enter a retroactive date. That came to our attention after it was done and the checks were issued.”

Clark says he personally met with DOA and the governor’s fiscal team to figure out how the error was made.

“So we were kind of stuck. So what happened was, after that, in order to document that this was kind of a software issue and not the original intent–there was never an intent to make a retroactive–the governor issued a memo, which was released earlier, which was a December 31st memo. Now, we thought the memo clarified the issue,” explains Clark.

Apparently that memo wasn’t enough. Attorney General Elizabeth Barrett-Anderson, in an opinion she issued at the request of Vice Speaker BJ Cruz, wrote “it is my opinion that the salary adjustments from January 26, 2014 to December 15, 2014 represent retroactive compensation for each individual employee in violation of Guam’s anti-retroactive payment statutes.”

“So her advice was–and the governor recognizes her authority as the chief legal officer, he’s following her advice–was those pay adjustments need to be returned,” he says.

“So we cannot issue to them these, we cannot reissue the compensation to them because they’re not here,” Clark points out.

Clark says they’ve identified about three to four different options to repay these former employees their bonuses, including possible legislative action, as suggested by the AG’s Office.

“We’re gonna pursue all of them, one of them–whatever–until we make sure that they’re made whole and they’re not gonna be stuck with the fact that they have to reimburse the money and then wondering what’s gonna happen,” notes Clark.

He emphasizes that whether the payouts are called bonuses, retroactive or any other process, the point is that these employees deserved it.

“The governor’s entire outlook on this is they were part of the team that was here when the governor helped to turn around the government finances. They’re really the ones who deserve to be recognized for all the hard work,” says Clark.

The attorney general said on the K57 Breakfast show with Ray Gibson this morning that although she wouldn’t choose that method for reprocessing of the checks, there is nothing illegal about it.