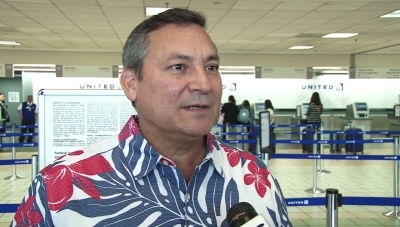 “We are not going to raise taxes, we’re going to foster small business activities.” – Governor Calvo during 2010 Great Debate.

Guam – On Weds. Governor Eddie Calvo unveiled a plan to raise the Gross Receipts Tax to fund the repayment of another bond borrowing effort for the Guam Memorial Hospital.

Governor Calvo and Senator Dennis Rodriguez announced that the plan would be officially introduced via two bills that will raise the GRT from 4 percent to 4.75 percent. This is to pay debt service on a loan that would provide $125 million dollars for capital improvement projects at GMH and expand healthcare to the uninsured. This proposed GRT hike contradicts the Governor’s previous positions on raising taxes. During the great debate of the 2010 campaign the Governor said, “We are not going to raise taxes, we’re going to foster small business activities.” He made similar statements in 2011 when he told PNC news “I don’t believe in raising taxes so I don’t see that as an option.” The Governor acknowledged during the press conference that raising taxes was not a Republican or Conservative ideal however he said that this is something that is now necessary in order to pay for the much-needed capital improvement projects at GMH.