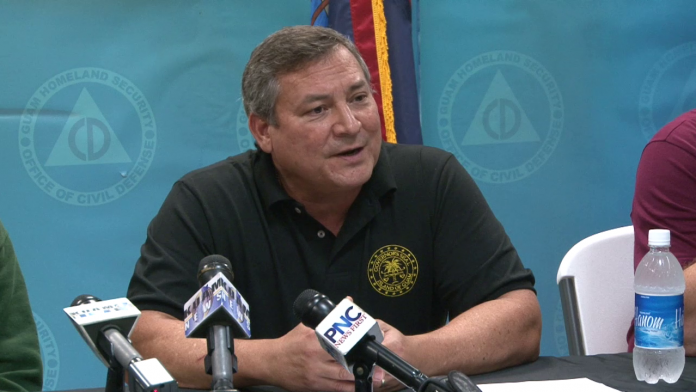 Guam – Governor Eddie Calvo has signed an executive order declaring Guam in a state of emergency in the wake of Typhoon Mangkhut.

“First of all, we are at the recovery phase of Typhoon Mangkhut,” said the governor during a press conference today at the Office of Civil Defense. “We’re looking at getting back to normal.”

Noting that assessments are underway, officials will begin tallying the estimated cost of the assessed damage caused by the typhoon.

“I will be writing an official letter to the president,” he announced.

Meanwhile, Lt. Gov. Ray Tenorio also went out to do an aerial assessment with the Guam National Guard, flying around in a helicopter.

The lt. governor concurred with Gov. Calvo regarding his analysis of the destruction of Mangkhut, saying, “It was clear from my aerial assessment that families displaced by damages to their homes caused by Typhoon Mangkhut will need help to restore their lives to normal. I want to help families recover from damages to their homes and property.”

Many of our viewers have reached out to us regarding their homes and properties being damaged. Charles Esteves, administrator of the Office of Civil Defense, discussed what they can do in the mean time.

As assessments are being made, David Gervino from FEMA’s incident management assistant team states that FEMA is on standby and ready to assist when needed.

“So we deployed personnel here to Guam in advance of the typhoon making landfall. We currently have approximately 100 FEMA employees here on Guam as well as another 100 people from other federal agencies here ready to assist. We’ve been co-located here in the Guam emergency operation center working closely with our partners and stand ready to assist as needed,” he said.