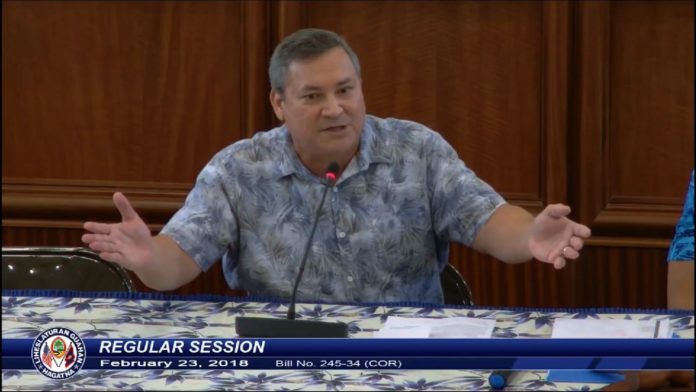 Guam – The Legislature continued session today to debate over bill 245 which would raise the Business Privilege Tax by 2 percentage points. The deliberations even brought the governor himself to make an appearance on the session floor.

Session began with debates on various amendments. Some were amendments to shorten the sunset provision on bill 245 making the proposed 2 percent BPT increase end in a year and some to determine when the raise should be effective–whether it be immediately, on March 1 or on April1.

There was debate on whether or not to vote on the original version the of bill without amendments. Eventually all the debate on the floor drew the governor himself out of Adelup and down to the Guam Congress building in Hagatna.

He began with a humble plea for cooperation.

“In all sincerity, as a fellow public servant, understanding that and with all humility that we are co-equal branches of government, and at the same time answering any questions you may have of such a pivotal bill that has such a consequence in terms of this administration, our government, our economy, the people of Guam in these next few months ahead,” said Governor Calvo adding, “I want you all to know that I’m here again in all humility in a very consequential bill that, if acted upon, can stave off a crisis that was not a creation of this body nor this administration nor the people of Guam. It was a crisis that was created by a body that we have no vote on and it was signed in by a president that we did not participate in his election.”

The governor spoke about the other bills he introduced prior to this bill. First was his bill that would’ve raised the BPT by .75 percent to fund the hospital. Then he introduced a bill to repeal exemptions for the wholesale, banking and insurance industries even though his family owns an insurance company.

“As a man who had been accused as a senator and as a governor of always looking at the special interests of my family and my businesses, I thought you would look at the sincerity of me that I’m putting out a bill, that you may not agree with, but I’m putting out a bill that would tax my own family companies. A family that I’m gonna go back to in ten months, whether it’s health insurance or wholesaling or even the BPT with retailing.”

The governor told senators he was there to work with them and to find a compromise. He encouraged amendments if it would save the bill because if the bill were voted down he said it would force his hand.

“Governor, I want to thank you for coming in today. However, we are working and we are working very hard to find other solutions. But I ask that you come before this body without harassing us. It’s unprofessional and I have so much respect for you but I don’t appreciate you coming in here and harassing us and threatening us if we don’t vote your way that you are going to call for our resignation. That’s all I ask,” said Senator Nelson.

“By the way, I’m not harassing you. I’m stating a fact,” replied Governor Calvo.

“It’s a form of harassment governor you’re using this as a platform to bully us and harass us,” retorted Senator Nelson.

“If you believe it’s harassment, then I’ll tell you this, then I want you to be with me when I lay the people off,” said Governor Calvo.

After this exchange, the Speaker recessed until 2 p.m. In the afternoon, the debate continued without the governor. Ultimately lawmakers opted to recess until Monday at 9 a.m.