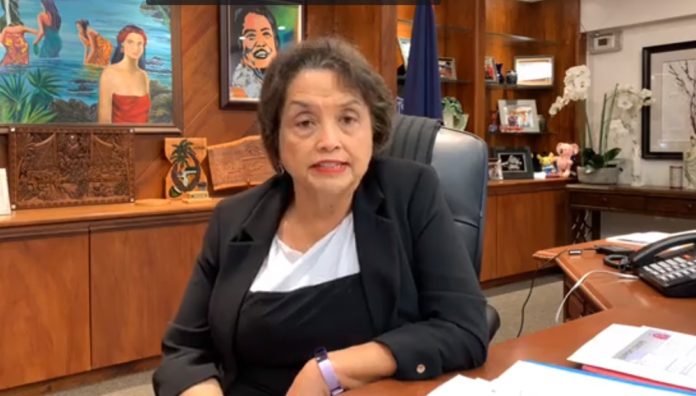 In a brief address to the island on her FaceBook page this morning Guam Governor Lou Leon Guerrero said that she is “very much aware” of the “plea from the Naval Commanders to help their sailors in their difficult situation.”

The Captain of U.S. Navy aircraft carrier USS Roosevelt that is docked on Guam has asked to be allowed to isolate most of his crew members onshore.  His superiors have now called on the Governor for permission to house some of the sailors  in a Guam hotel.

“We have been in discussions with Joint Region Rear Adm. John Menoni and U.S. Pacific Fleet Admiral J.C. Aquillino,” said the Governor. “I will be doing a news conference at 1PM to give the details of those discussions.”

However, Leon Guerrero noted that the 11 new positive cases of COVID-19 reported Tuesday night by Guam Public Health is “a big jump” from the one case reported Sunday and the 2 cases reported Monday.

“I’m concerned” said the Governor “that we are increasing more daily.”

The Governor again pleaded with island residents to stay home, wash your hands, and have minimal contact with people.  “That is what’s going to make these numbers go down,” she said.