Governor Lou Leon Guerrero has asked President Joe Biden to include Guam in any discussions about possibly using the island as a staging point for the evacuation of Afghan refugees.

In her letter to the President, Leon Guerrero commended his decision to end the nation’s longest war and finally bring home the brave men and women serving in Afghanistan. The governor said this decision signifies turning a new corner in foreign policy and the nation’s return to leadership in international diplomacy.

“Recently, it has come to my attention that some congressional members have suggested that a task force be established for the visa management and evacuation of our Afghan partners during this drawdown process and, in particular, that Guam be considered a temporary transfer site before our allies move to permanent locations within the United States,” Leon Guerrero wrote.

The governor stressed that Guam has always stood ready to serve as a safe and secure route for this type of humanitarian effort throughout history.

“And today, it is no different. I assure you that my administration is prepared to assist in executing your plans on this matter should Guam be chosen. If such a decision is made, I respectfully ask that I be part of critical discussions concerning Guam’s role and any related task force should one be established. I want to make certain, as the Governor of Guam, that these decisions reflect the best interests of our people,” the governor wrote.

She added: “Due to the gravity and urgency of this matter, I would like to speak with you soon. On behalf of the people of Guam, I thank you for your leadership.” 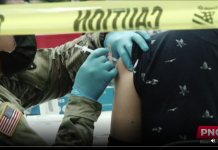