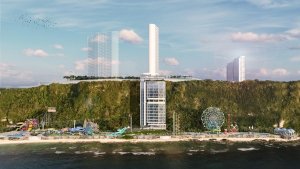 Agencies involved in the Vista del Mar project have discussed their role in the massive development.

Along with raising the eyebrows of environmental and cultural advocates, the ambitious development has prompted action and the approval from different GovGuam agencies.

“GWA’s involvement in the subject project to date has been the review of their Tentative Development Plan and application to the Guam Land Use Commission for height variances in early 2021 as part of GWA’s responsibilities as a member of the Application Review Committee.”

In the Summary of Position Statements from the Application Review Committee regarding Vista del Mar, GWA has approved of the project with conditions.

According to Bordallo, these conditions include “requiring advance coordination of engineering and construction plans, calculations of water and sewer demand, and requirements for off-site infrastructure development, among other things.”

He stated that, as of February 18, 2022, GWA has not received any further information or applications from the developer as of this date.”

The cost of the overall project and the project timeline, to DPW’s knowledge, is unclear for the time being.

Other GovGuam agencies involved in the project have yet to offer a statement.