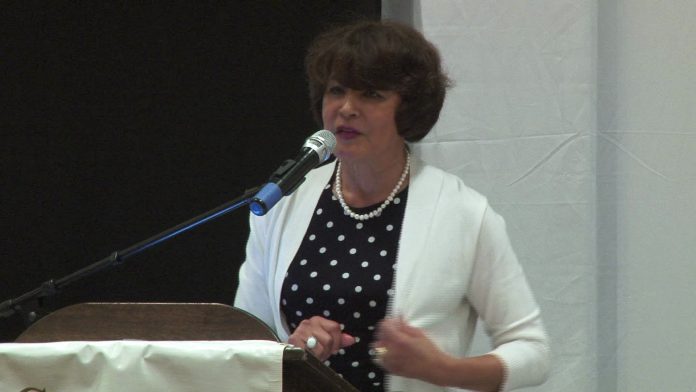 Guam – Public Auditor Doris Flores Brooks is anticipating a $90 million deficit for fiscal year 2015, which she says is an increase of $30 million from the previous fiscal year.

Public Auditor Doris Flores Brooks was the guest speaker at the Guam Chamber of Commerce’s monthly membership meeting. Today she spoke about GovGuam coffers. Not including autonomous agencies, the government of Guam has about 120 different funds plus the general fund.

Brooks then broke down what those liabilities are.

“Of that amount, $1 billion are in bonds–$1 billion we owe various bonds and $200 million is for long term leases, that’s to pay for JFK, Okkodo, the Okkodo expansion, those schools that we financed in the last 10 years. $1.2 billion is in long term debt. The rest is in accounts payable to you folks out there,” she said, referring to chamber members. “And another $100 million for tax refunds.”

The public auditor says for the unrestricted deficit, the cumulative amount since 1997 is $871 million. That number, she notes, is expected to increase.

In fiscal year 2014, GovGuam closed with $60 million in the red. Although the FY 2015 audit is still in its draft stages, Brooks says she’s expecting the government’s deficit to go up to $90 million.

“We’re gonna increase the deficit by $30 million. We have a cumulative short term deficit of $90 million dollars to add to the $871 million,” she notes.

Meanwhile, she says, the business community on Guam is a huge contributor to the island’s revenues.

The Guam Chamber of Commerce meeting was held at the Sheraton Laguna Resort.