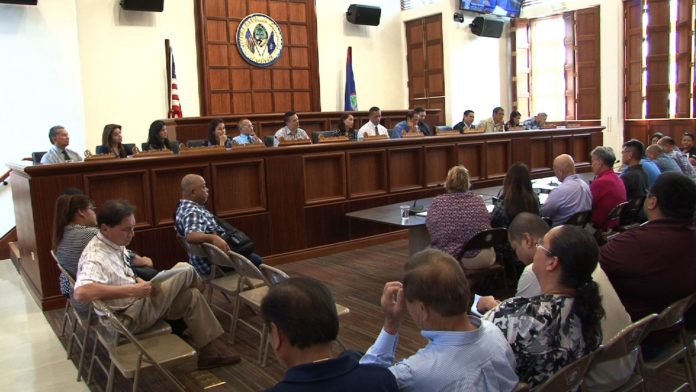 Guam – The public hearing room of the Guam Congress building was packed with GovGuam employees this morning who were there in opposition to the proposed rollback of hay raises. Speaker B.J. Cruz began by playing a video of Governor Eddie Calvo saying he would have to rollback hay raises to get control of GovGuam’s finances when he first took office in 2010. The Speaker said his bill 244 does the same thing.

This morning police officers fire fighters and hospital staff and employees filled the legislature’s public hearing room and spilled out into the halls of the Guam Congress Building. They were here to testify on bills 245 and 244 both of which call for an increase in taxes. Governor Eddie Calvo’s bill 245 seeks a 2 percent increase to the Business Privilege Tax while Speaker B.J. Cruz’s bill 244 seeks a 1 percent increase to the BPT with a rollback of Hay recommended raises. Raises made possible by the Competitive Wage Act.

The first panel up was made up of the governor’s fiscal team. “I have a young lady who has her master’s degree who has been working with us for six years who is a very very responsible dedicated and dependable person and she’s gonna be taking a ten thousand dollar cut in pay,” said Bureau of Budget Management and Research Director Lester Carlson adding, “Disgusting. Particularly with the magnitude of the amounts being discussed and the disproportionate share of those who are about to share the burden. This can be done it can be done via bill 245.”

The governor’s fiscal team all testified in opposition to bill 244 because of the rollback in raises and in favor of bill 245 because they say it will provide the revenues necessary to keep GovGuam afloat despite the Trump tax cuts. “Bill 245 seeks to reverse this reduction by transferring the tax loss from income tax to business privilege tax. The increase pay in profits which Guam taxpayers will enjoy as a result of reduced income taxes will enable those same taxpayers to afford the increase in the price of goods and services an increase of less than two percent. Even if businesses choose to pass on the whole of the BPT increase to customers rather than absorb the increase into the reduction of income taxes which they themselves will pay,” said Department of Administration Director Edward Burns. “With salaries being decreased for such a large population of the labor pool on the island it will greatly decrease the spending power of all affected personnel. The decrease in spending will directly affect the taxes we collect for every dollar spent in Guam’s economy. The overall impact on the economy for such a large number of employees will be felt by all businesses. Make no mistake it will be felt by all businesses,” said DOA Deputy Director Vince Arriola.

Members of the business community did not testify as of the publishing of this article they will likely testify after business hours during the last public hearing on the two measures which is scheduled for this evening(Weds.) at 6pm.