The Government of Guam has been ordered to pay an additional $132,000 in attorney fees to the lawyers who defended Arnold ‘Dave’ Davis during GovGuam’s latest appeal of his civil rights lawsuit to the U.S. Supreme Court. 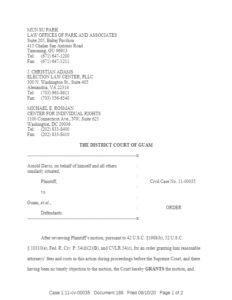 Last month, on May 4th, the nation’s high court declined to hear the appeal.

Davis filed his lawsuit in 2011 after he tried to register for the decolonization registry so he could vote in the non-binding plebiscite on Guam’s political status. His attempt to register was denied because he is not a native inhabitant of Guam.

Guam District Court Judge Frances Tydingco-Gatewood eventually ruled that Guam’s plebiscite law is unconstitutional because it is race-based and in violation of the 15th Amendment.

This latest payment order follows the roughly $1.2 million in attorney fees that Judge Tydingco-Gatewood approved last December for payment to the various attorneys who have represented Davis prior to GovGuam’s appeal of the case to the U.S. Supreme Court.