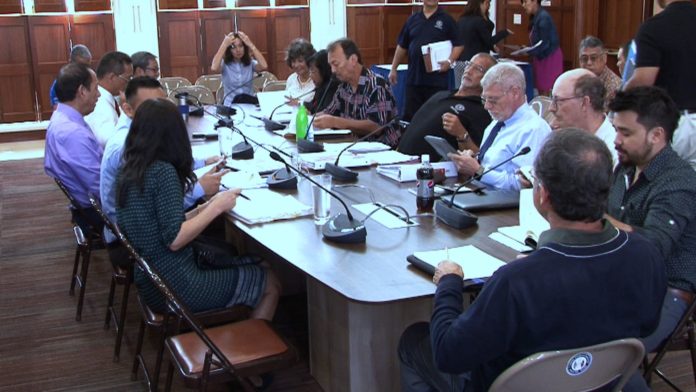 Guam – The Office of Finance and Budget is saying that the GovGuam financial shortfall for this fiscal year is actually going to be far worse than what the administration originally calculated. The administration estimated a $47.9 million-dollar shortfall due to the Trump tax cuts; however, the OFB is estimating the actual figure to be at $67.05 million. This means the shortfall for this fiscal year is now estimated to be nearly $20 million dollars higher.

The new estimate was provided during this mornings(Tues) Special Economic Services meeting. After hearing the OFB’s presentation the Public Auditor said it matched figures she recently received from the Retirement Fund on its January 30th annuity payments. “The Retirement Fund income tax withholding decreased by $165 thousand dollars for that pay period alone. That was a 20 percent reduction. That translates to $2.8 million dollars for the remainder of this fiscal year or $4 million dollars for a full year. And that was a 20 percent and I thought that was high but now based on what you’ve just said that number was spot on,” said the Public Auditor.

Department of Administration Director Edward Burns also agreed with the figures presented during the SES meeting. “Mr. Speaker we now have those numbers and I would confirm Mrs. Brooks number we’re getting around 20 percent too for the government employees,” said Burns.

So how will GovGuam deal with this huge loss of revenue? Speaker B.J. Cruz says it will have to be a combination of spending cuts and revenue enhancements through increasing some sort of combination of taxes and fees.

BBMR Director Lester Carlson said the governor has re-issued the cost containment measures he introduced via an executive order he issued when he first got into office. “We are requiring and mandating general cost containment measures in the areas of power, maximizing office space, looking at potential reorganization, fuel consumption, procurement, consolidated training for staff and development, fleet management and maintenance and personnel actions. For the record we at BBMR are not processing any general fund funded vacancies for the positions that are funded for this fiscal year. We are also denying any travel requests that are funded out of the general fund,” said Carlson.

The BBMR director says these measures should allow GovGuam to reduce expenses by $15 million just in the Executive Branch and its line agencies. More money can be saved in non-line agencies like DOE which has been tasked with cutting $19 million dollars and the Legislative and Judicial branches.