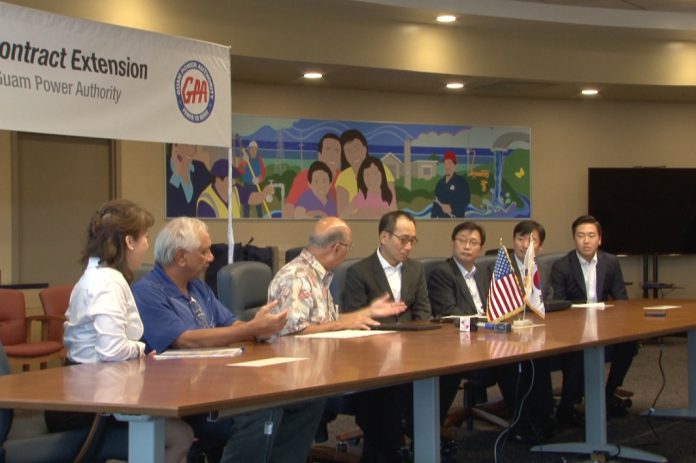 The deal will ensure Hyundai provides fuel-oil to The Guam Power Authority until August 2018.

“Power is very important in our community and what we have in this contract is the ability to run our power plants given a steady, reliable, affordable supply of oil from our partner, Hyundai corporation,” said Consolidated Commission On Utilities Chairman Joey Duenas

By picking up the three, one year contracts all at once, we negotiated with Hyundai a price that over the three year period will save us $46-million roughly, in the premium price,” said Duenas

The premium price that Duenas is referring to is the price that ratepayers pay for the residual fuel oil. Here’s how it works, Hyundai brings in the oil for GPA. The Oil is then purchased on the spot market using a line of credit. This ensures Hyundai that the oil they are delivering is paid for by GPA, According to Duenas. The savings come as a result of lower premiums, which Duenas describes as things like logistical costs for the oil and profit margins for Hyundai. Instead of paying the previous premium, by picking up the three one-year extensions into one three-year extension, through negotiations, the premium price drops. That drop accounts for a savings of $15-million a year for three years, hence the $46-million total savings as a result of the contract extension.

“We just started with our supplying of fuel oil to GPA, but this is not the end of story, we will be trying to expand some other businesses and diversify some more other even existing we will be here in Guam for a long time, that’s our hope, and also not only just making the business but we will like to contribute whatever to Guam society in the future,” said Chung