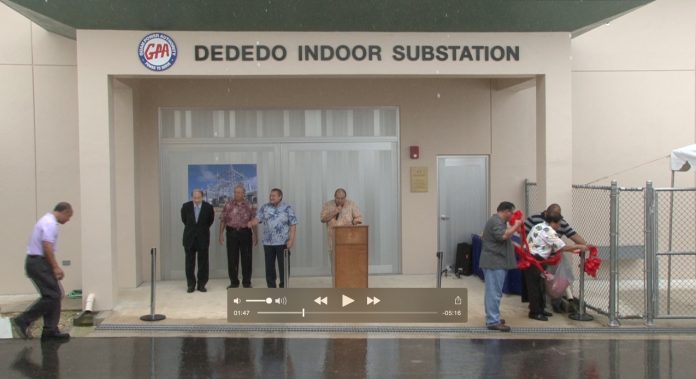 GPA management, Dededo Mayor Melissa Savares, Governor Eddie Calvo and other stakeholders were all attendees at the celebration.

GPA General Manager John Benavente says the new substation will allow GPA to keep the lights on in Yigo and Dededo even during typhoons and violent storms that threaten the power system. The $5 million upgrade essentially moved substation equipment from outside and into a newly built, air-conditioned building. Construction on the substation took almost two years to complete. According to GPA 2010 bonds funded the upgrade. The upgrade will boost substation capacity from 22 to 30 MVA’s. The bid to upgrade the system was awarded to AYM international. A substation works as a middleman so to speak between power produced and power put out. Once power is generated it is sent to a substation where it is condensed and controlled. Next the substation sends the power out a lower, more controlled voltage to the transformers and into the home.

At the ceremony, Gov. Eddie Calvo spoke to GPA’s reliability, “If you were to go back 20-30 years and someone were to say that 80- mw would be knocked out of our system and our grid, most people would be starting to cut the Tangan-Tangan trees and using it for firewood as we barbecue. For you to go through some of the crisis that has occurred and losing such a tremendous base load unit capacity and yet our island of Guam is still in a stable situation, I just got to give you folks a hand.”

CCU Chairman Joey Duenas was also present at the ceremony and he says, “I’d like to give thanks to the ratepayers for paying for all of this.”