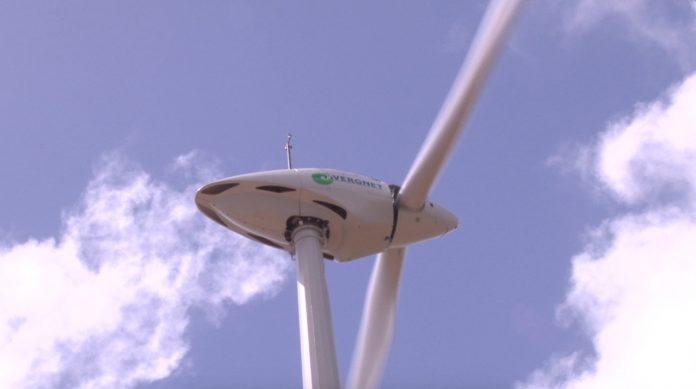 Guam has taken a giant step towards renewable energy, as today (Friday) they cut the ribbon on a wind turbine.

Guam – For the first time ever on Guam, the Guam Power Authority has introduced a $2.1 million wind turbine generator capable of generating 275 kilowatts straight to your home.

CCU chairman Joey Duenas says having this wind turbine will undoubtedly save GPA money on fuel. Duenas says the perfect wind speed to maximize energy from the turbine is 12 meters per second. He says this is when the turbine is capable of pumping out 275 KW and able to power around 60 homes. When the wind drops, so does production.

Duenas says that this particular project helps GPA establish wind data for future businesses that would be interested in setting up a wind turbine in Guam.

“It’s going to give us data, so that as people come to Guam and say maybe we want to do wind project, we will be able to give them some data, they will be able to do a better job in terms of their business plan,” said Duenas.

But what is the future of wind energy on Guam? Pacific Green Resources is a future company looking to break into the wind turbine industry on Guam. PGR, the first company to sign a renewable energy contract with GPA, recently submitted their request with GPA for an extension on their wind turbine project.

“The way that works is they put in a proposal and the proposal led to a contract between them and GPA. So were letting GPA handle that, whatever GPA comes to, I don’t know. They’ll have to review it and come to us, it will help whoever comes,” said Duenas.

GPA General Manager John Benavente says they have not made a decision on whether or not to grant PGR their extension.