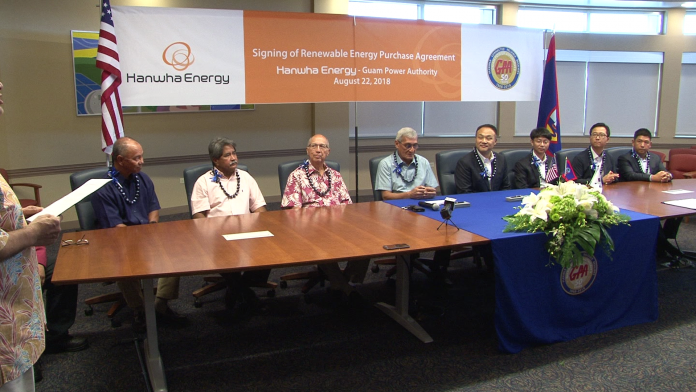 Guam – Island ratepayers will soon be seeing reduced power rates, as promised by the Guam Power Authority, as they expand their renewable energy footprint on Guam. Today, GPA signed a contract with Hanwha Energy Corp to build facilities that will produce 60 megawatts of power.

The signing ceremony was held at the GPA headquarters in Fadian, Mangilao where representatives from Hanwha Energy were on hand.

The contract will produce two 30-megawatt solar photovoltaic projects for a total of 60 megawatts of renewable energy.

GPA General Manager John Benavente says with this project, Guam will reduce its oil importation by about 9.6 million gallons. This will also translate into reduced LEAC rates which controls a large portion of power consumption since it’s based on fluctuating oil prices.

“It means that in by 2022, 9.5 percent of the energy is gonna be generated by the PV system by Hanwha,” said Benavente. ‘”But most importantly it’s also gonna provide savings for our ratepayers. Wnd when we say ratepayers, this is savings that’s gonna go directly to them, it’s gonna go right to the LEAC, it’s gonna reduce every penny that comes from the savings that goes into that. And what is that? The savings is somewhere in the neighborhood of $20 million over five years, the first five years and that’s based on a LEAC of 11.5 percent.”

And since renewable energy does not depend on the price of oil, Consolidated Commission on Utilities Chairman Joseph Duenas says this will provide long term stability to ratepayers.

“So for the 25 years, the price of energy from these renewables are stable, very small increase,” he says. “For so many years, we’ve been used to fluctuating fuel oil prices, so I’m very happy to say that this will begin to end that era.”

Duenas also announced that Hanwha will be bringing in energy storage in the form of batteries.

GPA will host another signing ceremony on Friday for another 60 megawatt facility, this time with Kepco LG CNS Consortium.