Guam – Guam Police have arrested 2 suspects in the robbery of a Japanese couple Monday evening in Tumon.

GPD Spokesman Officer A.J. Balajadia credits both the Tumon/Tamuning Precinct and the Criminal Justice Strike Force for making the arrests.

Officer Balajadia says the incident happened shortly after 8pm when the man, and his wife, who is 6 months pregnant, were standing outside the JP Super Store. 2 men approached them and snatched their purse.  The suspects then fled on foot towards Nana’s Cafe.

When Officers from the Tumon/Tamuning Precinct arrived, witnesses on the scene pointed out the direction in which the suspects fled. Officer Balajadia says that TTPC officers were able chased down one of the suspects near the scene and Task Force Officers also responded to help apprehended the second suspect.

Officer Balajadia says both victims and eye witnesses “positively identified” the suspects. The couple’s stolen items were recovered and returned, except for their I-Phone.

The pair have been booked and confined. 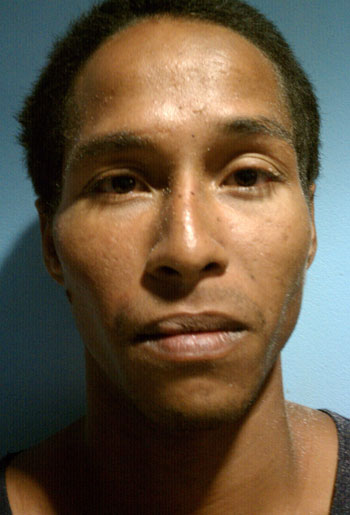 READ the release from GPD Spokesman Officer Balajadia below:

On Monday 10/28/13 at around 8:18pm, Police dispatch transmitted over police radio a robbery (Purse Snatching)that occurred in front of the JP Super Store and the suspects fled on foot towards Nana’s Cafe, Tumon.

First to arrive on scene were officers from the Tumon/Tamuning Precinct. A witnesses pointed in the direction of a suspect that attempted to flee once he saw the officer. That suspect was apprehended.

Additional officers from TTPC and the Criminal Justice Strike Force arrived and were able to apprehend the second suspect.  While at the scene, victims and eye witnesses positively identified both suspects.

Victims are husband and wife (6 Months pregnant) Japanese tourist from Fiesta Resort .  Stolen items were recovered and returned to the owners except for an I-Phone.

No injuries reported. Arrested were:

Both were booked and confined. Suspect pictures attached