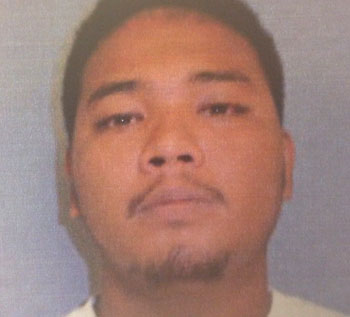 Guam –  A.J. Meno Toves of Dededo has been booked and confined for robbery in connection with a purse snatching last night on the JFK Hill leading to Tumon.

The robbery was called into police dispatch at 8:49pm. The caller said the suspect ran down JFK Road towards San Vitores in Tumon.

GPD Spokesman Officer A.J. Balajadia reports that the Criminal Justice Strike Force responded and found the suspect and the victim’s orange Salvatore Ferragamo bucket purse containing U.S. currency & a credit card.  The purse was located several feet from  where the suspect was arrested.

Officer Balajadia says a field line up was then conducted, first with the eyewitness, then the victim. Toves was identified by both.

At 8:49pm, TTPC received information from Police Dispatch of a reported ROBBERY on JFK Road and that the suspect ran down JFK Road towards Rt 14 Tumon.

Criminal Justice Strike Force personnel responded and assisted in locating victims belongings described as an orange SALVATORE FERRAGAMO bucket purse further containing US currency & a credit card.  The purse was discovered several feet from  where the suspect was detained.

A field line up was conducted first with the eye witness then the victim.  The male was identified by both parties to be the responsible for this robbery.