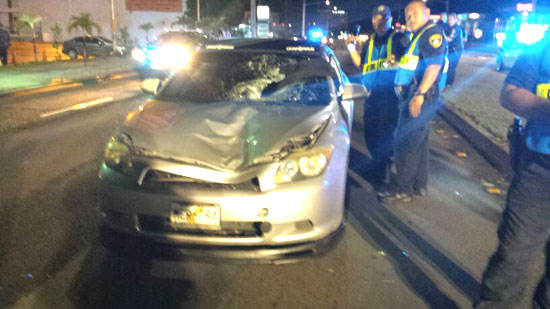 Guam – A young man who was struck by a car in Tamuning early Saturday morning has stabalized.

The man was in critical, on a breathing machine over the weekend. But as of Monday morning, GMH Nursing Supervisor Shirley Pinera told PNC News that he had “stabilized.”

According to a brief statement from Guam Police Officer A.J. Balajadia,  the victim was hit by a 2007 Toyota Scion which was traveling northbound on Marine Corps Drive near Denny’s.

A 39 year old man was driving the Scion. The impact shattered his windshield and caused heavy damage to the front hood.

The man’s identity has not been released. Officer Balajadia describes him as “poss late 20’s/poss FSM pedestrian.”

No arrests were made. The case remains under investigation by Guam Highway Patrol.